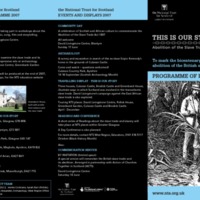 This is Our Story

To mark the bicentenary, the National Trust for Scotland put together a wide-ranging programme of events to engage their audiences with Scottish connections to slavery and abolition. Three National Trust for Scotland properties in the West of Scotland – Culzean Castle, Brodrick Castle and Greenbank House – illustrate the ways in which Scotland was involved in the transatlantic slave trade. A touring exhibition based on this new research was shown at these sites and others in the West of Scotland. The Beckford Collection of furniture, silver and China at Brodrick Castle, on the Isle of Arran, once belonged to William Beckford, owner of several sugar plantations in the West Indies. Scipio Kennedy from ‘Guinea’ lived at Culzean Castle, Ayrshire, from 1710, first as a slave and then as a paid servant. The Allason brothers of Greenbank House were traders in tobacco and slaves. David Livingstone spent much of his life campaigning against the slave trade based in East Africa. His work is remembered at the David Livingstone Centre in Blantyre.

The 2007 Learning Programme involved workshops for local community groups and a resource pack for teachers and youth leaders. Events included a celebration of Scottish and African culture at the David Livingstone Centre; a survey and excavation in search of the ex-slave Scipio Kennedy’s home in the grounds of Culzean Castle; and a Commemoration Service arranged in partnership with Action of Churches Together in Scotland (ACTS).