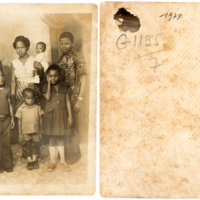 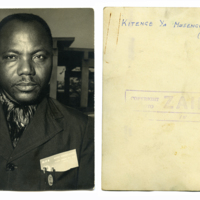 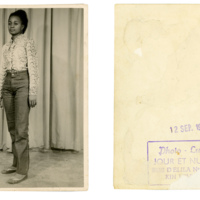 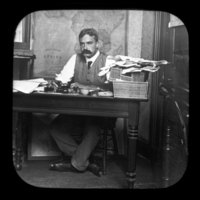 A portrait of British abolitionist Edmund Dene Morel (1873-1924). Morel was a shippping clerk for the Liverpool company Elder Dempster which had a shipping contract between Antwerp and Boma. He raised the alarm about exploitative practices when he noticed that ships destined for the Congo Free State were packed with guns, chains and explosives rather than the usual trade good. In response to what he discovered Morel went on to found the Congo Reform Association. He also set up his own newspaper - The West African Mail - which focused on the commercial abuses being committed in the Congo Free State. This image (Neg. 7) formed part of the Harris Lantern Slide Collection. Under King Leopold II the Congo Free State used mass forced labour to extract rubber from the jungle for the European market. As consumer demand grew King Leopold II's private army - the Force Publique - used violent means to coerce the population into meeting quotas, including murder, mutilation, rape, village burning, starvation and hostage taking. Alice Seeley Harris and her husband Reverend John H. Harris were missionaries in the Congo Free State from the late 1890s. Alice produced a collection of images documenting the horrific abuses of the African rubber labourers. Her photographs are considered to be an important development in the history of humanitarian campaigning. The images were used in a number of publications. The Harrises also used the photographs to develop the Congo Atrocity Lantern Lecture which toured Britain and the the USA raising awareness of the issue of colonial abuses under King Leopold II's regime. Source: Antislavery International and Panos Pictures