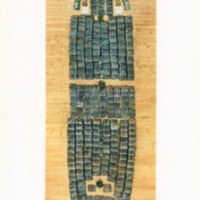 La Bouche du Roi was created by artist Romauld Hazoumé, who lives and work in the Republic of Benin, West Africa. The multi-media artwork is named after a place on the coast of Benin from where enslaved Africans were transported. It comprised 304 plastic petrol can 'masks', each representing a person, arranged in the shape of the woodcut of the Liverpool slave ship Brookes. The aroma of tobacco and spices are represented alongside the terrible smells of a slave ship. The artwork was accompanied by a film showing the motorcyclists who transport petrol illegally between Nigeria and the Republic of Benin. The cans and motorcyclists are metaphors for modern forms of enslavement and resistance. First exhibited at the British Museum in London, La Bouche du Roi toured to the following venues during 2007-9: Ferens Art Gallery in Hull, International Slavery Museum in Liverpool, Bristol's City Museum and Art Gallery, Laing Art Gallery in Newcastle, and the Horniman Museum in London.