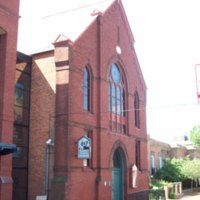 Formerly the Mount Moriah African Methodist Episcopal Church, the site was constructed in 1875 and opened as the Banneker-Douglass Museum (BDM) in 1984. It was named after Benjamin Banneker – a free-born African American scientist and mathematician. He protested strongly against slavery, and compared the fight of the colonists to that of the enslaved people in America when writing to Thomas Jefferson in 1791. The other namesake was Frederick Douglass, a political activist, writer, and famous abolitionist who documented his experiences both escaping from and fighting against slavery. The museum is dedicated to preserving Maryland’s African American Heritage. It contains a range of both permanent and temporary exhibitions. In light of this legacy, the BDM focuses on a community-based approach to building collections and exhibitions and in providing tours, public programs, and other services. The museum's permanent exhibition is a celebration of African Americans in Maryland; providing an overview of African American history in Maryland from 1633 to the present day. Specifically the exhibition looks at Maryland’s first African American settler, Mathias De Sousa. It includes Benjamin Banneker’s almanacs, used as an anti-slavery protest to Thomas Jefferson, as well as a recording of Frederick Douglass’s speeches against racism and slavery. The museum presently partners with Anne Arundel County Public Library, offering programs and workshops at AACPL branches. It also offers guided tours of both the permanent and temporary exhibition.