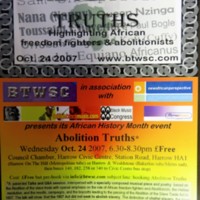 Abolition Truths was a panel-led talk and Q&A session at Harrow Civic Centre in October 2007, led by a creative arts community group Beyond the Will Smith Challenge (BTWSC). The event had a particular emphasis on the role of African freedom fighters and abolitionists, the Haitian Revolution, and the revolts, campaigns and boycotts leading to the passing of the 1807 Act. The event was interspersed with music and poetry, including a musical piece 'Then to Now' performed by Africanus Britanicus, and featuring HKB Finn & Co, which told the story of slavery and its legacy across the African diaspora. Teenage poet Stefan Testsola performed a poem on the theme of abolition. There was also a presentation of the Professor Allotey Science Prize, awarded to Harrow students of African descent.

Other BTWSC events in November 2007 included a discussion session with Ms Serwah, 'Putting the Abolition & Slavery Into Perspective' at Willesden Green Library, presented in association with Brent Black History Brent Library. 'From The Talking Drums to Rap & Grime' at Tavistock Hall in Harlesden commemorated the Abolition Act through narration and a musical concert.