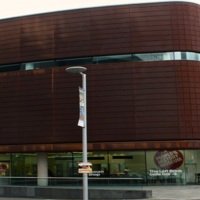 The People's History Museum (PHM) is Britain’s national museum of democracy, telling the story of its development in Britain; past, present and future. It is located in Manchester, the world's first industrialised city and aims to ‘engage, inspire and inform diverse audiences by showing there have always been ideas worth fighting for’. Attracting over 100,000 visitors a year, with free entry, the museum outlines the political consciousness of the British population beginning with the Peterloo Massacre in 1819. The British transatlantic slave trade and the abolition movement feature in this discussion early on in Main Gallery One. In a small display, the interpretation discusses the role of slave-produced cotton in the rise of Manchester as an industrial powerhouse. It goes on to describe the important role that the people of Manchester had in supporting the abolition campaign. The focus is on the local experience. This is also illustrated with one of the exhibition’s key interpretive characters, William Cuffay, a mixed-race Chartist leader whose father was a former slave.  In Main Gallery Two, the displays are brought closer to the present day, other issues explored include anti-racism and attitudes towards migration and multiculturalism. There is a clear link, although not explicitly expressed, in the interpretive text between these ideas and the lasting legacies of Britain's involvement in the slave trade.