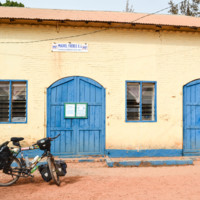 The Museum of Slavery in the village of Albreda first opened in 1996. It is housed in the Maurel Fréres building which was built by the British colonial government in the 1840s. Only a short distance from Juffure, the home of Kunta Kinte - the main character of Alex Haley's 'Roots' - the museum is dedicated to interpreting the history of transatlantic slavery in the area. It is a hub for students and researchers.

The museum's displays use a collection of artefacts to examine the process of enslavement, with particular focus on capture and the Middle Passage. These artefacts include chain neck collars, foot cuffs, yokes and manillas. The museum also has a display about 'Roots'.

Guided tours are regularly welcomed to the museum. Visitors are also frequently taken to visit the nearby 'factory' ruins which was once used as a slave station by French and British colonial administrations.