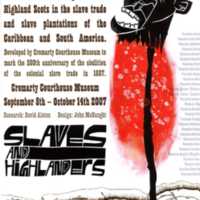 An exhibition developed by Cromarty Courthouse Museum in the Scottish Highlands recording the role of Highland Scots in the slave trade and slave plantations of the Caribbean and South America and, in particular, British Guiana. The striking illustrations were by John McNaught. The exhibition told individual stories of Scottish merchants, plantation owners and their slaves, such as a slave called Inverness, bought, sold, exploited and hunted as a runaway by Scots in Demerara. It also looked at the freed slaves who found a place in Scottish society. Connected to this project was the placing of a plaque in the former Royal Northern Infirmary (now the executive office of the University of the Highlands and Islands). It remains one of the few acknowledgements of the use of profits from the slave plantations to fund charitable public institutions, and the only known one in Gaelic.