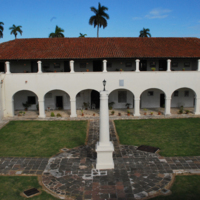 The Museo Nacional Ruta del Esclavo (Slave Route National Museum) is housed in San Severino Castle, in the Matanzas district of Cuba. It opened in 2009, as the product of UNESCO's Slave Route project. Off the beaten tourist track, the museum in the seventeenth-century castle receives few visitors.

The museum itself houses an important exhibition, aimed at showcasing the horrors of the Transatlantic Slave Trade in order to prevent the like ever happening again. The museum has four exhibition rooms with photographs, objects and archaeological items accompanied by interpretive text. These rooms address the origins of slavery, the plantation systems, abolition and emancipation, and the ongoing legacies affecting people of African heritage around the world.

After being selected by UNESCO to house interpretation for the Slave Route project, the museum has supported a number of African cultural groups in the local area, as well as hosting activities for the nearby university. In the exhibition space itself, there are fourteen African sculptures donated by Cuban artist Lorenzo Padilla. 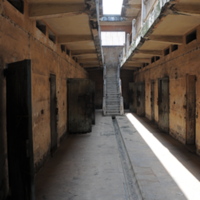 The museum is housed within Ussher Fort, one of three European forts built in the Accra region of Ghana during the mid-seventeenth century. Developed by Ghana's Ministry of Tourism, with support and funding from UNESCO, the museum opened in 2007.

The museum aims to highlight the history of the transatlantic slave trade in Ghana. Beginning with the development of the trade in human beings, the museum covers the history through to British abolition.

The collection is varied and includes items once used by both captors and victims. There are weapons, African household items and a model of a slave vessel. The museum also contains paintings of several key abolition figures, including William Wilberforce and Harriet Tubman. 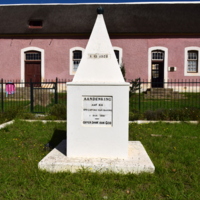 Elim Heritage Centre was opened in 2009 in the Moravian mission village of Elim. Situated in the former mission store, it relies on funding from a grant by SAN Parks which permits a modest salary for its sole member of staff. Elim was established in 1824 and, in common with other mission stations in the area, saw an influx of newly freed people following the end of the post-abolition apprenticeship period in 1838. The centenary of the ending of the apprenticeship period in 1938 was marked in Elim by a monument situated across the road from the Moravian Mission Church. A feasibility study for an Elim offshoot of UNESCO’s Cape leg of its Slave Route project in the late 1990s revealed that many Elim residents were unaware about their slave heritage. Although the feasibility study did not amount to a longer-term UNESCO project, the undertaking did encourage interest in slave history in Elim. The 1938 monument was rededicated in 2004, and the Heritage Centre’s foundation can be traced to the feasibility study. As well as featuring as a community repository including donated trade and home objects, photographs, and clothing, its collections include a series of display panels created by the Slave Route feasibility study.

The Heritage Centre’s displays are modest and consist mainly of photographs pinned to display boards. There is little on slavery itself, although one primarily photographic panel shows a clear pride in the 1938 memorial and the way in which it has functioned as a form of remembering slavery over time in Elim. Reference is made to 1 December Emancipation Day as a way of reconnecting with ancestors. Another display details the genealogical origins of Elim, giving the names of early settlers among whom formerly enslaved people are clearly evident. The Slave Route display panels are not on open display. Indeed, it is the behind the scenes work of the curator where the Heritage Centre’s connections with slavery become more apparent. It holds substantial church records, and the curator assists with genealogical enquiries from around the world, including from people researching their slave ancestry.