There are hundreds of thousands of children trapped in India’s carpet industry. Most of India’s carpets are woven in Uttar Pradesh, where the majority of workers are low-caste Hindu boys. Some are lured into bondage by agents’ promises to their parents that they will receive good wages, and others are kidnapped. The boys are forced to work for no pay, for 10-18 hours a day, seven days a week. They are beaten, tortured, branded, kept half fed and half clad, and are usually made to sleep in the loom shed. Cuts and wounds are frequent.

Ravi was trafficked into a carpet loom in Uttar Pradesh. He was liberated by activists from Bal Vikas Ashram (BVA), an organization that liberates and rehabilitates child slaves. Rambho and other boys were found weaving carpets, wearing only underwear, and had been forced to weave rugs for 12-15 hours a day, beginning at 6am. After their liberation, the boys were taken to BVA, in Uttar Pradesh, where they received medical care, counseling, literacy training, and basic rights education. They returned to their villages after six months. BVA continues to liberate children. 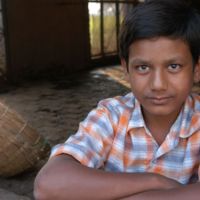 My name is Ravi Shanker Kumar. I think I am between 12 and 13 years old. My maternal uncle’s son was working in the loom and it was he, in fact, who told my uncle to go back to village and talk to my parents so they could send me here. Eventually the loom owner landed up in my village and met my parents. He went to my father and told him that he should send me to the loom factory. I was very happy in my village, playing, having a good time. Until the loom owner showed up.

My parents came up to me and asked me if I wanted to go. I refused. They agreed. The loom owner refused to take no for an answer, however. He argued that he didn’t agree with my parents. They succumbed to his demands. He paid them a sum of 500 rupees [$10] and then they asked me to leave. Once he had paid the 500, the loom owner and I took off from the village. We boarded a train and throughout the entire train journey he refused to feed me. He just didn’t give me any food. It was only when I got up to Allahabad that he gave me four samosas to eat.

After the train journey we went from the station to the loom owner’s house. We went inside and sat down and ate some dinner and went to sleep. The next morning I woke up without any food or any full nourishment, we both went to the place where the looms and the machinery were kept. That was the first time I saw the loom.

I was made to sit at a loom and the very first day that I sat there he made a little mark on the loom itself. He gave me clear instructions that up to that mark I had to weave a carpet. If I was unable to do so, I had to work under candlelight to reach that particular mark. Because I was made to work late-night hours, I would never be able to sleep adequately in the night. As a result I was always sleepy when I was on the loom and my work would get spoiled. The whole morning I would be weaving and I would only get some basic food at about 12.30pm. The food wasn’t good. I didn’t like it at all. Everyday I had to force myself to eat it. Once in a while the loom owner would ask me: “Ravi, have you eaten your food?” And I would say: “Yuh, I have.” Basically, he would give us half-cooked rice, and the dal would be not well cooked and full of water—not at all what dal was supposed to taste like.

In fact, things were so bad that once in a while, while working on the loom my fingers would get cut and they would get nipped. Each time I got cut on my finger, I would go up to my boss’ wife and say: “look, I’ve got a wound on my finger. Can you give me some medicine, some ointment you can give to me?” The boss’ wife would not put any ointment for my wound. In fact, she would take a little bit of kerosene and put it in my wound and strike a match to it. That would hurt terribly. The wound would not heal, and we were made to go back and resume weaving again. Very often, because the wound was in raw condition, the blood would start oozing out of my finger. But then we could not stop. With the blood running down my finger I was made to weave. Only when it became so bad that I could not possibly weave anymore, would I stop. And the moment I did stop, I was beaten up. There were two ways he would beat me up. With the stick of the loom, he would lift that up and beat me up with that. Or, there was an instrument called a punja with which we would put the threads down and snap it with the loom. It’s a sharp instrument and he would use the wooden portion of that and beat me with that.

I didn’t get any money, but I did get a bed. We were confined in one room and made to work for a period of 12 hours. Once in a day we could go and maybe use the bathroom but those bathroom stops were limited in number. In the evening, once I would finish working on the loom, I would go up to him and ask for a little bit of money so I could go to the market and have a good time. He would always refuse. No matter when we went to him, he would just refuse to give us any money. At the maximum he would give us a rupee. Or he would say: “Don’t worry, we will go tomorrow.” He was always lying to us. My father came to visit me once. He asked the loom owner to release me but he refused: “Until such time as the carpet is completed, I can’t let him leave because he’s the only one who knows the pattern.” My father went away. So that was it. That was the only time I spoke to my father.

I would think: “There has to be something better.” I would think of running away. But the thought of running away would always be followed with the thought of: “What if I get caught?” If I did get caught I would be beaten up mercilessly. Therefore I never ran away. I was rescued in a raid operation conducted by Dajna Kurooji, a person who works in the Ashram. He came in a raid and picked me up from there and got me to the Ashram. I was very scared during the raid. I thought I was going to get beaten up again and they’re going to throw me away. I was terrified. The loom owner would tell us: “If and when the police come, run away, run away because they are going to be mean to you.” The police official was smart enough to park the vehicle about three kilometers away from the loom and made his way slowly. We were surprised because they crept up on us slowly. The kids were working on the loom. We didn’t have any option to run away.

The first day I came to the Ashram, the other kids showed me around the place, where the bathing area was, where bathroom was. They showed me where the cocks and rabbits lived. I was fed a good meal and I went to sleep. It was just beautiful the first time I knew that I was not going to be beaten or tortured. What I like best here are the studies, the playing, the food, the interactions. I love it. I don’t think I’ll like my home anymore. I think when I do go home, I’ll miss this place. Before I sleep, I always make a comparison between this and home. I’ve fallen in love with this place. I don’t want to leave. But then also I do. I want to go back home. I have no clue—this or that? I’m also trying to learn how to be an electrician. I like the electricity idea. I like the fact that the teacher gives us notes and lessons which we have to memorize. He asks me questions in class and when I’m able to answer, it feels good. When I go back home, I’m sure I’ll join a school and continue my education. I dream to teach my brothers, to teach my sisters. I dream to teach my fellow village people. I dream to learn and teach, and do them both together.

I would like to tell the children who are working right now on the loom to stop, to do what they want, to stop. If I got a chance to talk to the world, I would relate my life story. I would tell them that I was working on the loom. I would tell them about my rescue. I would talk to them about how I came to this wonderful place and how I was given the opportunity to study, to learn. I would tell them about my life experiences. And I want to simply tell Father Louis: “Six months, six months of my life I’ve spent with you. But you’ve turned it around. You’ve given me a whole new life, a fresh lease.” This Ashram is such a great place. Not only is there the education, but physical training, prayers, growth in all aspects. Now I know for a fact that every child in entitled to study. I know for a fact that no child should be subjected to any torture from anyone. I know for a fact that you should not be made to work for anybody else for food.

Narrative as told to Peggy Callahan for Free the Slaves, October 31, 2004, at Bal Vikas Ashram, in Allahabad, Uttar Pradesh, India. 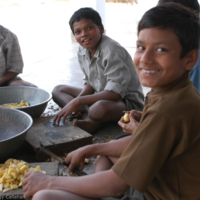 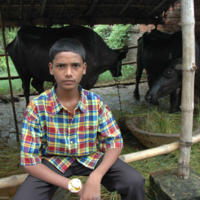 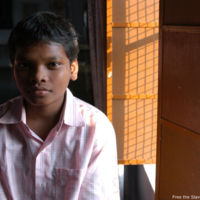