Tamada was born into slavery in Niger, home to some 43,000 hereditary slaves. Found among four of the country’s eight ethnic groups, slavery is a centuries-old practice in Niger. Slaves are controlled through violence and indoctrination, and are separated from their parents at a young age. Women and girls perform domestic duties, men tend herds of cattle and goats, and children are often passed from one owner to another. Individuals are also born into slavery in Mauritania, Mali, and Chad.

Slavery was outlawed in Niger in 1960, when the country claimed independence from France, but this remained a theoretical ban. In May 2003 slavery was made punishable by up to 30 years in prison, and that same year, Tamada learnt that her mother and grandmother had escaped from their master. She decided to do the same. But her turning-point took several months: she waited, worried, and thought about running away, before seizing her children one evening and beginning her escape. Leaving Mali, she crossed the border back into Niger with her two children—the first born when Tamada was 12 years old. She was assisted by Timidria, a human rights organization founded in 1991.

Tamada concludes with an acknowledgement that life after bondage remains hard. And the 2003 law seems to have made little difference for other slaves. In September 2004, the Tuareg chief Arissal Ag Amdague made a written promise that he would release 7000 slaves owned by his people. Claiming that his religious beliefs as a Muslim were incompatible with slaveholding, he said he wanted to release the slaves he had inherited. The date was set for this first ever release of slaves in Niger: March 5, 2005, at a ceremony in the village of Inates, near the border with Mali. But no mass emancipation took place. Instead, on March 5, just a month after Tamada had narrated her story, Amdague stood before the crowd and denied that he owned any slaves. 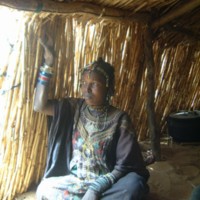 My name is Tamada, I don’t know my age but I think I am about 20 years old. The situation of a slave is more than I can say. With all the violence, I lived everyday in fear. I was born into slavery, like my mother and grandmother. I was separated from my mother when I was very little. My master took me with him from Niger to Mali and gave me to his eldest son.

I worked everyday since I can first remember. I was always moving; pounding millet, washing, cooking. I worked from dawn till late after dark, collecting firewood and fetching water. I was also made to clear up my master’s faeces. When I was small I looked after the camels and if they wandered off I would be beaten. As I got older I began to look after my mistress’s children and then I had to do all the household chores. I only saw my mother sometimes. When my master’s father came with his family, then they would join our encampment.

My master and mistress often insulted and spat at me. I was scared because if I didn’t do what they said they would hit me. There was so much violence, verbal insults, spitting. My master used to beat me often. I was so afraid of him.

I heard from other slaves that my mother and grandmother had escaped, and then things got bad for me, as my mistress wouldn’t let me out of her sight. But I started thinking about running away. It was hard, I cried a lot, I kept thinking of my mother. I didn’t know where to go and kept thinking of the danger. I have two small children and I was very scared. One evening a few months later I grabbed my children and when no one was looking I ran. I carried my children and walked and walked, very far, over 30 kilometres. I walked from encampment to encampment begging for food and shelter, and when I got near Inatés on the border with Niger some people told me about Timidria. I remember being so scared; I thought my master would come after me.

Thanks be to God some good people took me to the Timidria people. They helped me so much, they helped me find my mother. I can not find the words to say how life is better, now I live in Ayorou with my mother and grandmother. I am happy now I have my own family, and I no longer live in fear, but life is hard, we have very little, sometimes not even enough to eat.

Narrative as told to Romana Cacchioli for Anti-Slavery International, with the Timidria Association, February 2005, in Ayorou, Niger.