Dalyn told her story at the age of 17 while living in a shelter. She was enslaved at the age of 12 after a woman made false promises of a job in a garment factory. Instead, she was sold to a brothel and abused physically and psychologically until the brothel owner was arrested and the children rescued by the AFESIP (Agir Pour La Femmes en Situation Précaire, Acting for Women in Precarious Siutations). Like many other survivors, she expresses a desire to tell her story in order to prevent the enslavement of others. Despite endemic corruption that contributes to slavery in various sectors in Cambodia, including with vulnerable demographics, the government has done little to investigate, prosecute or convict complicit officials. 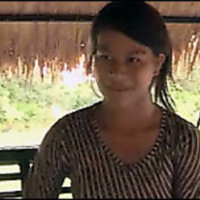 I was living with my grandfather in Cambodia. As a normal, happy child I did not fear anything. Then, at 12 years old, a woman asked me whether I would like to work at a garment factory. I agreed and went with her. But she sold me to the owner of a brothel in Phnom Penh, the Cambodian capital. I felt betrayed and cheated. I thought I was going to find work. I never thought I was going to be sold like that.

There were lots of other boys and girls at the brothel. I overheard two pimps bargaining and heard one of them say my price was $150 (£78). My heart sank and I started asking myself where the hell had I ended up. I saw many couples coming in and out of the rooms. From that moment on, I knew something was seriously wrong. I was frightened and desperately wanted to ask the children what kind of place this was.

A group of men came into my room and told me to receive a client. I asked what I was supposed to do. They told me: "Don't worry, you'll know what to do. And if you don't, you'll do it until you do." I refused but they told me to shut up and said that "one way or the other" I was going to have to do as they say.

They dragged me out of the room and I screamed and called out for help. They put a gun to my head. I pleaded for my life, telling them this wasn't the work I had been led to believe I would be doing.

But the brothel owner said: "You didn't follow anyone here. You're here of your own free will. You are a prostitute and you came here looking to work as a prostitute." I said: "I'm young and I have my future ahead of me. Please don't make me do something like this."

But then he said I would be shot if I refused. He ordered in a group of men carrying electric cables. I cried and screamed out for help but nobody came. They starved me until I agreed to go with clients.

I was locked in a cage with others underneath the brothel for entire days. I was only ever allowed out when a client came. Some clients were considerate and quite kind. Others were not. If I refused to perform particular sex acts, clients would beat me up and report me to the brothel owner. The brothel owner would also beat me and tell the other girls in the brothel to beat me too.

The psychological impact was horrendous. It lives with me even to this day. When it finally dawned on me that I was a prostitute, I felt a sense of utter disgust. I had become the very thing I most despised.

It is slavery of the worst kind. They have total power over you - they get you to do anything they want. You feel like dirt and there is nothing you can do except follow orders. You could end up dead.

I was scared right up until the brothel owner was arrested. Then I realised that we were being rescued. We were rescued by the police and the AFESIP, an organisation whose founder, Somaly Mam, is a former child sex slave and famous figure in Cambodia.

I was so relieved and happy. I do not know what the future will bring. I feel it is my obligation to tell everyone that they should do everything they can to prevent themselves and others going through prostitution and all the things I had to go through.

By the end of it, you will end up lower then you can ever imagine... in hell.

Narrative as told to Rageh Omaar for the BBC.