Holly Austin Gibbs (formerly Smith) is a survivor of child sex trafficking and an advocate for survivors of all forms of human trafficking. In 2011, Holly submitted joint testimony to Congress with labour trafficking survivor, Ima Matul, in support of reauthorization of the Trafficking Victims Protection Act. Holly also testified before the U.S. Congressional Subcommittee on Africa, Global Health, Global Human Rights, and International Organizations on the connection between sporting events and sex trafficking. In 2015, Holly testified before the U.S. Senate Judiciary Committee on behalf of two bills: Justice for Victims of Trafficking Act and Stop Exploitation Through Trafficking Act. Another narrative by Holly can be found in the archive. 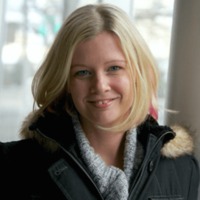 My name is Holly Smith, and I am a survivor of child sex trafficking within the United States. In 1992, at age 14, I was a shy, insecure, and angry teenager. I had just graduated eighth grade middle school, and I was afraid of starting high school. I was afraid of getting beat up, I was afraid of never being pretty or cool enough to get a boyfriend, and I was afraid of losing my friends. I was also very depressed and in need of real help and guidance.

I grew up in rural South Jersey, and my friends and I often hung out at the local mall. It was at this mall that I met a man who picked me out of the crowd and asked for my phone number. I felt special that he picked me. And he told me that I was special when we talked on the phone. He said I was too mature for high school, that I was pretty enough to be a model. He said he could introduce me to famous bands and that I could become a songwriter. As a kid who grew up on MTV, this was my dream. After we talked on the phone for about two weeks, this man convinced me to run away from home with him. Within hours of running away, though, I was forced into prostitution on the streets and in the casino hotels and motels of Atlantic City, New Jersey.

Thirty-six hours later, I was arrested by police and treated like a criminal. Without appropriate aftercare services, I struggled for many years to overcome my victimization. I struggled with depression, drug abuse, and domestic violence. As a young adult, I managed to put the past behind me, and I graduated college with a 3.6 GPA in Biology and a Minor in Writing. I had been working as a microbiology analyst for nearly ten years when I happened to watch a documentary on sex trafficking in India. It wasn’t until then that I realized that what had happened to me as a child happens to women and children across the globe.

Today, I advocate against all forms of commercial sexual exploitation of children (CSEC) and all forms of human trafficking against any person. I recently wrote an academic book on child sex trafficking in the United States called Walking Prey (Palgrave Macmillan); and through my research, I discovered many inconsistencies in much of what I was seeing and hearing in the media. I believe the biggest lesson to learn from past Super Bowl preparations is the importance of credibility and longevity in prevention and aftercare efforts.

In a blog post last week, Rachel Lloyd, Founder and CEO of Girls Educational & Mentoring Services (GEMS), explained that “shaky” and “overblown” statements and statistics can and has caused damage to the credibility of the anti-trafficking movement. “We want people to get engaged in this work and the movement for the long haul,” explained Lloyd. However, people are often “so put-off by the hyperbole” and sensationalized statistics that, soon after the sporting event has passed, they are left in a state of “disillusionment and cynicism” toward the movement. This kind of awareness and prevention is counteractive. Statistics and claims must be studied and verified; and prevention efforts cannot begin and end with sporting events.

In January 1992, the year I was trafficked, the Washington Redskins and the Buffalo Bills competed at the Super Bowl in Minneapolis, Minnesota. Had there been an anti-trafficking awareness campaign in Minneapolis, could the explosion of media attention reached me on the east coast? Could I have been warned? Maybe. I guess we’ll never know. But what I do know is this: there were significant awareness campaigns around the Super Bowl events in 2010, 2011, and 2012. Yet, after I had presented my story in 2013 to the very middle school from which I graduated in 1992, a girl raised her hand and asked me: “Why am I just now hearing about this?” I pose this question to the Committee: why had a 14-year-old girl in a group of at-risk youth never heard of child sex trafficking? It’s because our nationwide efforts on child sex trafficking prevention are misplaced and lacking. The Department of Education needs to create and include programs for the education and prevention of child exploitation. Such programs should address media literacy, healthy relationships, healthy role models, mental health awareness, coping skills, volunteer projects, education about social issues in the community and abroad (including human trafficking), and education about community resources.

CSEC and sex trafficking of any person can happen at many types of sporting events, from “bike week” in Myrtle Beach, North Carolina to hunting season in South Dakota. However, there are many other risk factors in many communities in the United States that can raise the demand for commercial sex, thereby increasing the risk of CSEC and sex trafficking. These include but are not limited to: the presence of a commercial sex industry, legal or illegal; tourist and business attractions; proximity to military bases or other locations with transient populations of men; a high transit area; a subculture of homeless youth; a presence of gangs; and a proximity to national borders.

Education and awareness campaigns about CSEC and sex trafficking of any person must be developed and maintained in all such communities in order to help prevent this type of exploitation. In addition, there must be outreach efforts to connect with potential victims and offer long-term aftercare services. Furthermore, programs must be created and maintained to address those factors that might predispose adults and children to being vulnerable to commercial sexual exploitation, including sex trafficking. In my book, Walking Prey, I list many predisposing factors to keep in mind for prevention programs specific to CSEC, including school bullying and poverty. The same applies to other forms of child exploitation and human trafficking; awareness, prevention, and aftercare programs must address all risk factors and root issues.

If we are to continue the campaign against sex trafficking at sporting events, then we must use the opportunity to bring to every city both accurate information and resources for long-term awareness, education, and aftercare. This is because, as Rachel Lloyd points out, “commercial sexual exploitation and trafficking will undoubtedly happen in the New York/New Jersey area during the first week of February [with Super Bowl XLVIII], and the second and third and fourth week of February and in March and April and every single day and every night throughout the year.”

This applies to any community in the world that may be vulnerable to any form of exploitation. Thank you for providing me this opportunity to be here today.