In 1985 William Akoi Mawwin was captured and forced into slavery at the age of six years. During raids by Muslim militia from Northern Sudan on the villages of the Christian Dinka tribes during the 1980s, tens of thousands of other boys between the ages of four and ten had the same fate. As well, babies and toddlers were killed, and girls were raped, killed, or forced into slavery. Some boys who escaped capture headed to refugee camps in Kenya, but it is estimated that only one in three survived the journey.

After seven years in slavery, William escaped and lived on the streets of the capital. He worked to earn money for a passport, and left for Cairo, Egypt, where he found work in a rubber factory before a machinery accident took his hands. In 2001 the US government granted 3600 Sudanese orphans refugee status. Some 500 boys, including 21-year-old William, were placed in Arizona.

William fashions his capture as a sudden disappearance: “You’re gone for good.” But his narrative confronts this problem of erasure and offers a solution: “I’m here,” he insists. This assertion of ongoing presence is part of William’s call to action. While his family gave him up as dead after he disappeared—“[n]obody believed,” he observes—William refuses to give up, in turn, on other slave children: “I’m not going to give up. I believe,” he concludes. For while he still doesn’t feel entirely liberated (explaining that his “heart’s not free”), William seeks a final sense of freedom through activism that might lead to a large-scale liberation of Sudan’s slaves. Reminding his reader about “the kids who are slaves today,” he asks: “What are we going to do…?” 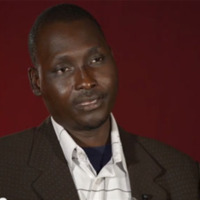 My family means a lot to me, means everything. You need to have a hug from your mom, a kiss, hang out with your father, laugh. I was six years old when I was captured. People came and boom boom, running by with horses and shooting people, killing people, capturing kids, taking kids away, and tying them to horses. When I saw a person shot, bleeding, it scared me more than anything. You’re a little kid, you’re thinking Grandmother will come along and yell at them and get you out, but no. You’re gone for good. Because I was a little boy I had to accept it, because I don’t have my family around me, to survive I had to accept it. You have to lie: “I look at your wife like my mom, I look at you like my father.”

In the capital I was so excited, not thinking about the past—you’re a poor man, trying to survive. Then I thought, you go to Egypt, you make good money, and buy what you want.

I still need to get a hug from my mom but it’s not going to be the same. Right now I am not free. My heart’s not free.

When we talk about slavery and don’t take action, it feels like, “why should I say my words?” I should just stay at home and forget about it. But I can’t forget about it. I can’t. When I was captured I was six years old. I saw four three-year-olds getting killed because they didn’t have mothers. Who was going to be the mother of those kids? So they just took them and killed them. And when they kill them, they don’t kill them in a way you can’t see—they put them in front of you, and say, “you see that?” They want to get you to be scared. So when you’re six years old and you don’t have a family around you, when you have no one to protect you, what do you think? In my situation, I built a lot of trust with my master—got him to trust me to be a leader in front of other kids. But I didn’t tell the other kids my plan. You just have to do it.

I planned it for five years. I saw people getting cut in the feet when they tried to escape. They cut their toes, and when they cut your toes you cannot run. You can’t even walk far.

And what about the mothers, whose children are captured? Even if their child makes an escape and comes back, what is she going to do? He’s going to have no culture, he’s going to be a weird person in the family. He’s going to see himself alone, always. He’s not going to be happy.

Sudan is not a country that has education. Do I know my story? Some people don’t even know their birthday. Some people don’t know what money is. When I was in my village, I thought I was in the only village in the world. But if kids have education, they will not be enslaved today. They will now what a ‘human right’ is.

Today, ‘human rights’ is about talking. It’s not about action anymore. When you think that the United Nations is speaking up today—a UN resolution, section this, number that, quote 1500 whatever—what does that mean? Will it help me in the village? I don’t have TV in the village. I have my resources, people are killing me for my resources, but I don’t know what the resource is because I’m not educated. I don’t know where the oil is, I’m not educated. I’m getting wiped out, in my land.

But when we have education, paper keeps the story. When you write something down, you pass it down to generations. We don’t have that. Do we know if our great grandfather was a leader? Do we know if he was a thief? We don’t know, because we’re not educated.

Politicians in South Sudan, their kids are in London, America, first world countries. What about the poor kid? The person who doesn’t know how to use soap, to wash his clothes, to wash his hands? What are we going to do for him? Are we going to help them, or just let them die like a dog?

I don’t count myself as disabled. I have a brain, I don’t have hands. It doesn’t bother me. What bothers me is when I see people hungry. And I’m here eating, I have a TV, I’m sleeping.

For 22 years I haven’t seen my mom or my dad. My grandmother, who I was visiting when I got captured, died in 2004. Do you think she died happy? I didn’t find my family until 2004. I didn’t meet my brother until 2005. My brother told me people believed I died and was buried a long time ago. Nobody believed.

People have to take action, but we just do research. I don’t have anything to do with my people anymore, but I won’t give up. I’m here in America. I was in Egypt and my hands got lost, and I didn’t know where to go, but I made it to America. I’m here today, talking to people. Because when you don’t talk about your problem, I tell you that’s your problem. You have to speak to people, to let them know. We don’t need Sudan to be a perfect country. But the kids who are slaves today, are we going to get them out? I’m not going to give up. I believe. I escaped and I’m here today.