The vast majority of domestic slaves are girls aged between 12 and 17. Globally, domestic work is rarely scrutinized or legislated, and statistics are hard to obtain. But the International Labor Organization (ILO) estimates that at least ten million children, some as young as eight, are trapped in domestic labor around the world. There are two million child domestics in South Africa, 700,000 in Indonesia, 559,000 in Brazil, 200,000 in Kenya, millions more in India and Pakistan. The trafficking into domestic labor of children—mainly girls—is estimated to be worth $7 billion per year.

Seba was one of these domestic slaves. She left her home country of Mali for France at the age of eight: a couple took her to Paris, promising her parents that they would educate and care for her, in return for work as a nanny. But Seba was enslaved as a household servant, beaten, tortured, and forced to do domestic chores. She was freed when a neighbor heard the sounds of abuse and beating, and managed to talk to her. Seeing her scars, the neighbor called the police and the French Committee against Modern Slavery (CCEM). Medical examinations confirmed that Seba had been tortured.

In her narrative, which she told at the age of 22, Seba focuses on her mistreatment at the hands of a “mistress.” Though she does describe an occasion when the husband joined in a beating, most of the narrative is devoted to the starvation, beatings and torture by the wife. As well, while Seba terms the woman “mistress,” she never refers to the man as “master,” only as “[the mistress’] husband.” Showing a woman wholly invested in the institution of slavery, this narrative challenges the equation of mastery and manhood.

The image is a drawing by Seba, which she completed while telling her narrative. It was the first time she had ever tried to draw a person. 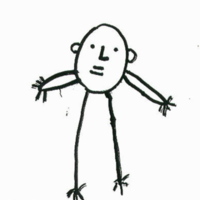 I was raised by my grandmother in Mali, and when I was still a little girl a woman my family knew came and asked her if she could take me to Paris to care for her children. She told my grandmother that she would put me in school and that I would learn French. But when I came to Paris I was not sent to school, I had to work every day in their house. I did all the work; I cleaned the house, cooked the meals, cared for the children, and washed and fed the baby. Every day I started work before 7am and finished about 11pm. I never had a day off. My mistress did nothing. She slept late and then watched television or went out.

One day I told her that I wanted to go to school. She replied that she had not brought me to France to go to school but to take care of her children. I was so tired and run down. I had problems with my teeth. Sometimes my cheek would swell and the pain would be terrible. Sometimes I had stomach aches, but I still had to work. Sometimes when I was in pain I would cry, but my mistress would shout at me.

I slept on the floor in one of the children’s bedrooms; my food was their leftovers. I was not allowed to take food from the refrigerator like the children. If I took food she would beat me. She often beat me. She would slap me all the time. She beat me with the broom, with kitchen tools, or whipped me with electric cable. Sometimes I would bleed; I still have marks on my body.

Once in 1992 I was late going to get the children from school, my mistress and her husband were furious with me and beat and then threw me out on the street. I had nowhere to go, I didn’t understand anything, and I wandered on the streets. After some time her husband found me and took me back to their house. Then they beat me again with a wire attached to a broomstick until I lost consciousness.

Sometime later one of the children came and untied me. I lay on the floor where they had left me for several days. The pain was terrible but no one treated my wounds. When I was able to stand I had to start work again, but after this I was always locked in the apartment. They continued to beat me.

Narrative as told to Kevin Bales, December 1996, in Paris, France.