Shandra Woworuntu graduated from college with a major in Finance and Bank Management in her native Indonesia. Looking for an opportunity to work in the US, she responded to an advertisement for a job that promised a six month position in the hotel industry in Chicago. But the agent who met her at New York City’s JFK airport drove her to the brothel and took control of her passport and identification. When she tried to protest, he put a gun to her head.

She was forced to work for 24 hours a day at different brothels throughout New York and Connecticut and eventually escaped by jumping out of a bathroom window in Brooklyn. Her traffickers were prosecuted and Shandra now works with anti-human trafficking advocacy groups and is a legislative lobbyist in Washington DC. 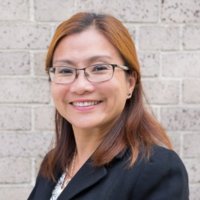 I am an advocate, a survivor of human trafficking, and the founder of Mentari, a non-profit organization dedicated to providing human trafficking survivors with mentorship and job training to help them rebuild their lives.

In my native Indonesia, I was a college-educated financial analyst employed by an international bank. I lost my job in 1998 because of political turbulence and its fallout, so I expanded my job search to the United States. After responding to an advertisement for a job in a Chicago hotel, I checked the legal documents, paid a recruiter fee, accepted the position and flew to New York City.

I entered the United States lawfully on a nonimmigrant visa arranged through the “recruiting organization” that brought me here. I was picked up at the airport, along with five other women, by men we all believed were affiliated with our recruiter. Shortly thereafter, however, our passports were forcibly removed, our lives were threatened and the situation became clear: we were being trafficked into the sex trade.

I managed to escape by jumping out of a small bathroom window, and I cooperated with law enforcement to successfully prosecute my trafficker. It was hard for me to survive because there were not many services available to help me. Safe Horizon, NY assisted me to be independent and also to stay legally in the United States.

I believe that to end human trafficking globally, the U.S. government needs to focus on prevention, and on strengthening policies that are enacted to prosecute traffickers and to provide victims with stable and sustainable support.

The U.S. government has been a leader, through its annual Trafficking in Persons report and other diplomatic initiatives, in urging governments around the world to do a better job of preventing modern slavery. Our government can do much more.

One of the most effective ways to prevent human trafficking is through education and awareness. I urge Congress to invest in supporting and encouraging countries to implement programs that will make people more aware, and will help them question whether a job opportunity is legitimate, or the work of a criminal labor recruiter.

Labor recruiters and contractors are directly involved in the trafficking and exploitation of workers around the world, including men, women and children who enter the United States lawfully. These criminal recruiters make false promises about jobs and charge workers high recruitment fees that force workers to stay in abusive or exploitative working conditions under debt bondage.

I know several trafficking survivors who paid up to $20,000 in recruitment fees for jobs that didn’t exist. In most cases, they borrowed the money from people or loan sharks in their home country that expect to be paid back. Now exploited, trafficked and unpaid, they cannot pay back those loans – this creates debt bondage.

It is important to have uniform standards for employment agencies that send workers to another country. They should be required give information about the working conditions for the jobs they are offering, and they should provide workers with a clear description of the workers’ rights.

Congress has an opportunity to help prevent trafficking by illicit labor recruiters into the United States, and to demonstrate to other countries the kind of policies needed to address human trafficking. I urge Congress to re-introduce The Fraudulent Overseas Recruitment and Trafficking Elimination (FORTE) Act of 2013, which would deter human trafficking, forced labor and exploitation by:

1. Requiring that workers coming to the United States receive accurate information about the job, their visa, and working conditions;
2. Ensuring that no fees for recruitment are charged to workers;
3. Requiring that the recruitment agency registers with the Department of Labor; and
4. Enforcing a penalty if the law is not followed.

I encounter men and women from all over the world who have experienced human trafficking in some form. They are from different nations, cultures and backgrounds, but many have one thing in common: they were brought here by a seemingly reputable recruiting agency. With an estimated 14,000 individuals trafficked into this country each year, it’s a problem that needs to be addressed – this legislation is one important part of the solution.

Another important step that the U.S. government can take to prevent modern slavery is to demand transparency in supply chains for products that are sold in the United States. California has passed legislation that requires companies to publicly disclose what efforts, if any, they are taking to ensure their supply chains do not include forced labor. This legislation is a good first step, but it should not be limited to one state; Congress should initiate supply chain transparency on a national level.

I also urge Congress to strengthen the United States’ role in developing a shared global foreign policy to fight human trafficking, and especially to prosecute traffickers. Building our capacity to conduct inter-country investigation and prosecutions should be a high priority in that effort.

Mr. Chairman, I want to ask today for your support of a Senate companion to H.R. 500, the Survivors of Human Trafficking Empowerment Act, introduced by Representatives Honda and Poe. This bill would create a survivors-led U.S. Advisory Council on Human Trafficking to review federal government policy and programs on human trafficking. It is so important that survivors play a role in finding the solutions to end modern slavery, and in helping the government understand how to provide survivors the support they need. This proposed legislation is a great step forward.

I want to close by saying that as a survivor of human trafficking, I am committed to empowering other survivors. That is why I established Mentari, an organization based in New York that provides mentorship and job training to survivors. It is very difficult for trafficking survivors in the United States, and globally, to recover from such a terrible experience. It is even more challenging when you are in a country where you don’t speak the language and have little or no family support. I hope the U.S. government will recognize the need to provide sustainable support for survivors, including long-term support to help survivors receive training and opportunities to gain employment. Programs that support job training and job creation can help prevent survivors from being re-trafficked, as well as protect all men and women who are vulnerable to exploitation and trafficking. I believe the United States, again, can and should be a leader in demonstrating best practices to the world.

Narrative as told to the US Senate Committee on Foreign Relations during the Hearing Ending Modern Slavery: What is the Best Way Forward, February 4, 2015, Washington DC.