Almasi was enslaved within Kenya. She was deceived by a childhood friend who said she could work as a cleaner in Mombasa. But instead she was taken to a house that served as a brothel and enslaved for six months. She escaped by jumping out of a moving vehicle. She later discovered that she was HIV positive.

As part of the process of narrating her story, she also created artwork. Her narrative explains the images of a wing and a tortoise. Almasi is a fictional name to protect the narrator's identity. 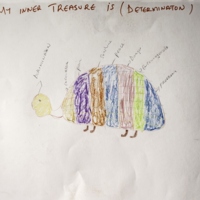 I know I’m pure, I’m beautiful, someone can see my heart from far. I am a mother of three that is two girls and a boy.

In 2009 I was married and when my youngest son was very young and that’s when we separated with their father and he went until today I have never seen him. I don’t know if he’s alive or dead. I went through hardships, I went through hard times with the kids and one was just young so I was going asking for work like washing clothes for people, doing cleaning and I became a very good cleaner and I survived. What I was earning was very little. Before when I was still a girl I had a friend. We used to play and share a lot when we were still girls, I did not have kids at that time and she disappeared for a long time. One day she appeared very beautiful, very different and changed. She came looking for me, I told her I have three children and then told her, “Your life, you have changed. What happened, what are you doing nowadays?” she told me “I’m staying in Mombasa and I go to work and I earn very good money. And you?”

I explained to her that I am doing cleaning, that I go wash for people. I told her that now I was worried because my son will be going to class eight and I needed money to pay for education.”

She told me no problem. “I will, if you want there is work which is paying very well in Mombasa. And that’s what I am doing and that’s why you see my life is changed. I’m not the one you had seen before.” Because she was a friend, I trusted her and decided to go to Mombasa. I left my children with my mom who I told I had found work in Mombasa. I had hope that maybe I could change something in my home because even my parents have that good life.

We then travelled that day, I can’t remember when but it was in 2009 at night. We reached Mtwapa at night. She then took me to a very private house with no neighbors. She called they opened the gate and we went inside. I was told that I would be given an interview because I said I am a good cleaner. While I was cleaning the house I found there were some other girls there. I did a good job, I was accepted. In that house there was no going out and there was no cleaning job again. I was employed there but not as a cleaner, it was another job…

Every evening men used to come there and pick up girls. We were there, it’s a big house but I think some were used to do that job by now. I also had no clothes so they brought me clothes, short clothes. I was not drinking alcohol but I had to drink there. You are forced, you must do what they want you to do because the owner of the house would be paid, there is nothing you can do because you don’t know where you are. Even now if I am told to say where I was staying, I can’t tell.

One day I asked the other girls, “When I was coming here I was told that I’m coming here to do a cleaner job. I wanted to ask that person.” One girl told me don’t ask anything here, if you ask, you might just disappeared. “

One day a customer came and that customer just picked me. He was a white man but he said he wants to go out with me. For the first time in 6 months, I was allowed to come out from that house with him. When we reached town on the road some commotion happened. Something happened and I always say it was maybe an angel that God sent for me on the road. People were fighting on the road and we stayed there, there was a lot of traffic. He did not close the door so I saw that and looked at him, I opened the door and walked out. He didn’t follow me and I always said that was just an angel that God sent to me to take me out of there.

I chose a wing because it helps creatures like birds to fly. It gives them energy and I feel that I have a wing to fly too. I put different colors there, there is yellow, there is blue, there is red, blue, red and yellow. And this is white. Yellow, for me it gives me courage to go on with life and blue, this is the color that makes me feel like I have been liberated from jail. Somehow I was being jailed and I am free. Red, for me it shows the pain that sometimes I feel through my body. Sometimes I go through a lot of pain, I just feel pain. I feel sick sometimes. This red shows how sometimes I feel inside me. The pain in my body. White shows the purity of my heart and soul. How to accept and take everything easy and say there and we have to accept it. Yeah, I have to accept it.

I want to work hard to provide a good education for my children so that they can be able to live a better life. I don’t have a land or something they will inherit but I can give them education that will be their future.

I am passionate about working in my community to create change so that other people will not have to go through what I went through. I expect a beautiful future and a future that is truthful. A future that everyone will be able to find greener pastures in their own home. A future with no lies, a great future indeed.

Narrative as created during art therapy with the organisations HAART and Art2Be.