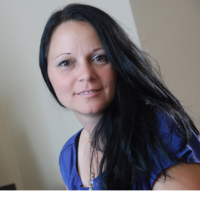 We started to look for an opportunity where we can make [a lot of] money in [a short] period of time.

[The trafficker] talks about possible babysitting, clean toilets, attending to families, talked about go-go dancing, which is in a nightclub, which is okay in Hungary, it's not a big deal. We were very desperate for money so she said, "we can buy your ticket just give me your emergency information: mom, dad, everything, name of your cat, address," like they're really concerned about you, right? So I just gave them all the information and next thing you know I was on the flight in two weeks to Canada.

I was picked up by two Hungarian guys and a Canadian man at the airport they take me to a motel. They said, you know, it cost them so much money to fly me to Canada so now I owe them about $3500. They said "we'll show you how to make money. We'll take you where the other girls are and you're gonna be able to make so much more money. They did take me to a club which was five minutes away from the motel and that was a strip joint.

They told me to go with this Canadian guy and there's some paperwork I have to do in the office. There was no paperwork. This man was about 42 years old and at the time I was 20, he's doing really bad stuff to my body that I've never experienced.

So we worked with 17, 18 hours a day and at the end of the day, which is 6 a.m., they would come to your room and take your money and I used to get, like, an egg salad sandwich once a day, that's what I ate, so that's how we lived, we lived in the motel, we worked, we slept maybe four hours in the morning sometimes we would have guys coming into our motel room and just help themselves with our bodies. Eventually you lose your mind and then you become a zombie and then you just do it because everyone else does it, nobody died from it, and you still don't understand what you've been through, you still don't understand that you are trafficked and trapped.

I did feel trapped because I remember I would sit in the window at the motel and I would look at other people how they are free to move around, right? Can I just do that one day? I didn't even realize it then that something is so wrong here. Towards the end I did so eventually I got to the point when I said "do you know what? I need to get out of here." I got a hold of a Hungarian dictionary and through the dictionary I was trying to communicate with a couple of staff members in the club that I actually felt comfortable with. I had no idea how to say it so I would be like "threat," "fake," "passport," "me," "scared," "help," so they would put the story together as much as they could. We figured out a plan - the manager, a couple of other people helped me to get my stuff and they put me in a limo-cab and they paid the driver and this was the first time after two and a half months being in Canada that I actually left the club and not getting yelled at. We were driving out of the city, I don't know where I am, it's just so beautiful.

I saw a newspaper - it was another girl's story identical to mine - and at the end the detective says in the story "if there's any other girls out there please contact us." It was very scary but when I walked to the station and he greeted me was the first time that I felt like a human being in a long time. I didn't tell him everything but I gave him as much as I could do at the time.

I tried to do a lot of other things in my life and nothing really made sense. And then I started volunteering and the more I helped people the more I realize that this is what I really want to do. I would never change what happened because of what I do today. I'm okay knowing that I go and give them a chance that I never had because it heals me too, it's fine - it works for me, it works for them - everybody wins.

As told to Free the Slaves