Erich took up a job as a babysitter for her friend Joeychev’s Aunt in order to save money to go back to school. However upon arrival at the house Erich was locked inside a room with other girls and forced to perform ‘shows’ in front of a computer. Forced to work for twelve hours at a time without breaks Erich was under constant surveillance. It was when the house was raided by police that Erich was freed. 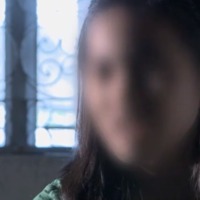 I didn’t have plans to go abroad because I like it here in the Philippines. It was my decision to work because I wanted to save and go back to school.

My friends’ aunt was looking for a girl so they came to our house and asked me to work as a babysitter and housecleaner. They said our sleeping area is nice. The house is nice. That we could go home every month with money in hand.

My friend’s aunt looked at me and said I was beautiful, and asked me to sit in front of the computer.

We were locked inside a room. The next day as soon as I sat in front of the computer she taught me how to do a ‘show’. There were four computers and eight of us who worked there. We’d take turns every twelve hours.

A ‘show’ is when you go naked, show you breasts and private parts. If they wanted you to finger yourself you would do it. I was disgusted and I cried when I did a ‘show’.

We didn’t have breaks, it was non-stop. If you left the room she would get angry. Her husband was also inside the house. There was a monitor where he could see if we were doing ‘shows’ or not.

I didn’t show her that I was disgusted and that I would cry. She’d just laugh at me and tease me. She’d say, “What is wrong with what you are going? You’re not letting men actually touch you.”

I am both excited and reluctant to go home because I am shy and scared that people will laugh and will be disgusted at me. That’s how people are, they gossip a lot.