At the age of 13 Joeychev, along with her friend Erich, took a job working as a live-in nanny for her aunt to help out her parents. However, rather than babysitting Joeychev’s aunt locked her in a room and taught her how to do ‘shows’ for clients in front of the computer. Joeychev was forced to work twelve hours a day with no breaks. Under constant surveillance she was made to perform for clients across the world from the Philippines, Holland and the US. After months of sexual exploitation, Joeychev was finally rescued after a police raid shut down her aunt’s cybersex operation. 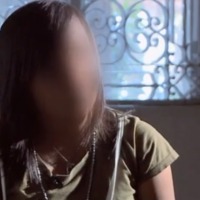 My parents were working but they found it very difficult to find enough food for me and my siblings.

She told my mum that I’d go there to take care of the children, because her husband was working and always away. She couldn’t look after her children because they were quite naughty so she hired me. I was thirteen.

[Joeychev went to work for her aunt along with her friend Erich. Rather than babysitting, Joeychev’s aunt taught them how to do ‘shows’ in front of computers]

It was hard because I didn’t know about those kinds of things yet.

In 12 hours sometimes I would get 15 customers. There were different nationalities – Americans, some were from the Philippines, Holland, Sweden.

To those who helped to get us raided, thank you for what you did. There was a time when I wanted to tell others but I thought twice. I think I was scared because she was still my aunt.

We want to warn other children so they don’t work in a job like this. To not hurry to work because we should still be in school. After school and at the right age, then that’s the time to work.