Mexico has one of the largest child labour forces in Latin America with 3.6 million children between the ages of 5 and 17 currently employed in some way. This has made children one of the most vulnerable groups of people subjected to labour exploitation in the country. 42.5 percent of children working in Mexico do not receive any income for their labour. The current prevalence of poverty in the country has meant that many families require children to contribute to the household income in order to survive. Moreover Mexico is home to thousands of street children who constitute a particularly vulnerable group often subjected to forced labour and sexual exploitation.

Jose was just 7 years old when he ran away from a neglectful home environment and began living on the streets of Mexico. One day he was approached by a boy who offered him a place to stay. When he arrived at the house he was told that he would have to work to earn his keep. Jose was exploited for his labour, became addicted to drugs and was recruited by a gang who made him sell in exchange for feeding his addiction. Jose was rescued by a woman from an NGO and is now an ‘older brother’ in the organisation, working to help children like himself. 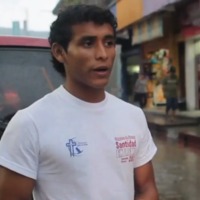 My mom’s job was sleeping with men for money. All my mom could do was rent a room for us. We didn’t have a bed or a table there. We’d sleep on the floor with some blankets. When my mom would come back, if there was anything wrong, if the house wasn’t clean or if my brothers were crying, I was the oldest, so she would come back and hit me.

She’d hit me with whatever she found, with pipes, cables… She’d kick me. It got to a point where I was really scared. She sent me to the market and it got really late, so I didn’t want to go back. And at that time I had just turned eight.

This kid came along, who was shining shoes. I was sleeping and he woke me up. Then I went with him because he said he’d give me food and that I could stay at his house. When I got to the house, the father of the kids said: “We all live here, but we have to work to earn our food. So if you’re going to live with us you have to go out and work. Here’s a shoe-shining kit. You have to go out and work. You’re going to bring me $50,00 a day.”

We had to give him the money, otherwise he’d hit us too. But if we gave it to him, he’d go out and drink and he wouldn’t leave any money for us to eat.

We didn’t care if we didn’t get the money, or if we had to sleep on the street. We cared more about buying our drugs. Some people came and asked us: “You want money for your drugs? Do you want money? We can give you money but you have to do what we say.”

They’d give me some packages. It could be marihuana… or crack or whatever, but I couldn’t open them. They’d give me the packages and I’d have to carry them.

By that time I was going on ten, and we never talked about how much money they’d give me. They just said “We’ll pay you some money.” At night, they’d get in the truck and put me in the back, and they’d say “That guy over there owes us money. So you go over there and tell him to come out.” When the guy came out, they’d take him and put him in the truck. And they told me “That’s what you’re going to be doing later. So you have to watch what we do.” And they’d hold me in front of them so I’d watch them hitting him, and beating him up, making him bleed and hurting him.

After some time, I was scared they’d beat me up like that too, so I escaped.

Once... I was really high and a woman looked at me. I went up to her and asked her for money. And she said she wouldn’t give me money because I’d buy more drugs. She told me about a home, but that sounded to me like being in jail, being locked up, not doing what I wanted to do. But I went to sleep at her house. And the next day she said “I want to take you to a home. I want you to get better.” I finally told her “OK, fine,” so she’s stop nagging me. I was used to doing whatever I wanted to do. I was used to not sleeping at night, walking around, doing drugs.

When I got to the home, I couldn’t do any of that anymore. The first time I ran away, it was because they left the door open. She went out to look for me. She found me, and when she did, she started crying in front of me. When she cried in front of me, I felt something completely new.

Since then… my life has changed completely.

After all I’ve been through, when I’m at the beach, I feel free. When you ride the waves you can laugh, scream… and let off steam. To me, the sea has healing power. It’s helped me heal. It’s helped me feel free and good about myself.

I know that there are lots of kids out there who are going through the same thing I went through, or worse. I know it’s hard, but I know you can put it behind you. If you have the will, you can get out of it. And you always have a chance. You can have a new life.