China remains a source, transit and destination country for men, women and children subject to forced labour. There have been a number of media reports exposing cases of forced labour in the country, especially among the disabled whose families are unable to care for them and with an underdeveloped government support system leaving them vulnerable. The disparity of work opportunities between rural and urban populations has created a high migrant population vulnerable to human trafficking. The lure of a higher income leads many migrant workers to accept jobs in China without knowing exactly what they entail.

Trong went to China from Vietnam after his aunt told him he could get housework near the border. He was told he would work for a couple of months and then return home. However upon arrival he was told by other Vietnamese workers that he had been deceived. Trong had been enslaved into debt bondage in a brick kiln, forced to work to cover the costs of transportation and accommodation. Eventually Trong along with his friend Lin were able to escape. 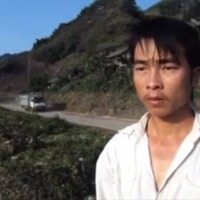 When I got home and first met that aunty she said it would be easy housework near the border. The work would be for a couple of months and then I’d be home again. She said I should try it out for a while and if I could not do the work and if I wanted to go home, then I could easily do so.

When I first got there, I didn’t know what kind of work was in store for me.

I’d been there for 2 or 3 days when I met a few other Vietnamese people. I became acquainted with them and they told me, “All of us Vietnamese people have been deceived.” At the time I felt very upset, but the reality was I was so far from home and didn’t have the money to get back.

The work there was physically demanding, tiring and required heavy lifting. The work was dangerous at times because after the bricks had been fired in the kiln, and had to be removed, if we weren’t careful they could collapse and spill out.

We had to pay for everything. Even the two mats they gave us, we had to put money together to pay for them. They said that the expenses had to be paid for, “For you transportation, food and accommodation. Your wages don’t even cover the costs and now you’re demanding money?”

When I got home I felt angry that I could be cheated by someone from my own family.

I have learnt a lesson, that from now on, whenever people talk about going away for a job, we need to be cautious whether they are our relatives, or strangers, we can’t trust just anyone.

I want you to know it’s not just women and girls who are deceived by these people.