Amy was a single mother struggling to provide for her children when she began working in an adult club. On her second night of work she met a man that offered her what she thought was a legitimate job. Once she reached his place of business, however, she was held against her will and subjected to physical and sexual abuse until she agreed to provide sexual services. In this narrative, Amy talks of the importance of training emergency services on how to deal with sex trafficking victims. 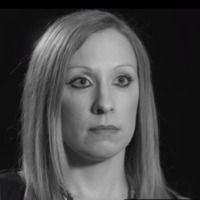 I still see this attitude of, "It’s just immigrants," or, "It’s just people in other countries." It happens to U.S. citizens so much more than people are aware.

We need to understand that freedom of movement does not equal freedom of choice. Most of the time, being trapped is something we can’t see. It’s something that the trafficker pinpoints as a vulnerability and is able to use against the victim.

The world of a trafficking victim is constant fear, constant dehumanization, just feeling like you are not even a person anymore. I experienced sex trafficking. I was a single mom trying to finish college, and that was what eventually led me to an adult club. It wasn’t something I was comfortable with, but, feeling pretty desperate, I thought, "Let me just try it, see what happens." The second night was when I met my trafficker. He was giving me what I thought was a legitimate job offer. You know, he said, "Let’s go over to my business." But once I got in there, I was held against my will, and that was the process of beatings and rapes by multiple subjects, and held in there for over 12 hours. And because that process was methodical and designed to break me down, I was very much like a robot. I was going to do what he told me to do. It wasn’t so much that nobody noticed; it was they didn’t know what to look for or what to call it. Sex trafficking is the action of a perpetrator recruiting, transporting, maintaining, harboring through force, fraud, or coercion for the purposes of exploitation.

I came in contact with a lot of law enforcement officials, and they just weren’t trained. Some of them were well-intentioned. What you’re really going to want to look at is other signs that indicate exploitation. I saw this in shelters; medical doctors as well ER—physicians. That’s why training is so important.

Having the resources available, allowing the victim to choose but giving her support to do so, is important

Having a long‐term support system of people who have been there, now, for years, has been why I’ve been able to do as well as I’ve done. It’s that long term that’s important.

I never thought that what I went through would be useful. The courts have found, when they have taken any cases... Now I’m in my last year of law school and enjoying being a mom and helping train law enforcement and using negative experiences that I’ve been through to put it to something useful.

Courtesy of the Office for Victims of Crime