Jenifer Kempton was sexually assaulted at a young age. Searching for a love she had never received in childhood when, at the age of 25, she thought she had met the man that would break the cycle of abusive relationships. However, instead he got her addicted to drugs and sold her to a gang where she was, branded with a tattoo and forced in to prostitution on the streets of Columbus, Ohio. Jennifer was eventually able to escape and devoted her time to promote awareness and advocate for social change. Jennifer founded Suvivor's Ink to connect survivors to resources and to cover the marks of ownership and violence given to them by their traffickers. 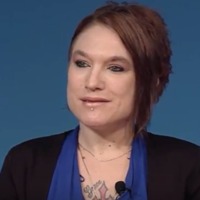 I grew up in an abusive, dysfunctional family and was sexually assaulted of my virginity at a young age. It left me with a number of vulnerabilities and I ended up having some domestic violence relationships. Erm which lead me to my ‘knight in shining armour’, my ‘Prince Charming’. And I was then groomed into a life that I never knew existed at that point. Through fraud, manipulation, coercion erm emotional fulfilment. As well as a drug addiction as well that was used to lure me in erm into this relationship and grooming process. It then changed the dynamics of things when another female and my original trafficker approached me and got me tied into debt bondage. More manipulation, coercion, fraud that led me into a life of being sexually exploited. At the age of 25 years old. Erm there was a lot of things that tied into my story including delivering my own child on the streets. I was kidnapped by a fellow trafficker, held hostage erm. I was raped with a butcher knife. One of the many assaults that took place. Beat, threatened violently. Erm I was terrified.

However, you know, I had a life changing pivotal moment after that rape with the butcher knife, and was able to escape that life of enslavement. I realised that that ‘Prince Charming’ was my, my captor, after he sold me to a gang. And after my escape I started to rebuild my life, which is a very hard, difficult struggle and I was really caught up because I was still psychologically enslaved. See each time I was traded off from my original trafficker to the gangs, what have you, I was branded. I was marked as cattle, as property and of who my owner was and who I belonged to. And so I earned enough money for my first cover up and realised what my purpose was in one of the cover-ups. Was to pay forward the freedom, mercy and grace that had been given to me in helping other survivors of human trafficking that had been branded or scarred with violence, erm reclaim their bodies through removing or covering their, their brandings. So I started Survivors Ink in order to dothat. We also raise awareness, create advocacy, resource connection for survivors to help them in their journey. We are survivor led; most of our volunteers are survivors. And it’s just really amazing to be a part of, you know this fight against trafficking. I feel it’s my duty to be here to share my story so that the public can understand what happened and help stand with us to put a stop to modern day slavery.

My escape was only an act of mercy from my Creator. After that two and a half hour erm brutal rape with a butcher knife, I found myself at the end of a rope…literally tied round my neck twice, hanging. Feeling the misery, the addiction, the enslavement, the trauma, all leaving out the bottoms of my feet. And that feeling got to my knees and I hit the floor and I was really angry. You know, I couldn’t even die to be put out of my misery. And yet a voice came out of nowhere and said ‘I have purpose for you and it’s not to die in the basement of a crack-house’. Erm thankfully I did discover what that purpose was. Is helping my brothers and sisters by using my story to raise money, raise awareness in order to help them in their journeys. Erm going off Evelyn there, yes once we escape, there’s a whole new hell.

It’s not easy you know. You can rescue us all you want. That’s not what we need. We need opportunity, we need opportunities not just for counselling and we don’t want your pity, we don’t want your sensationalised story seeking coming our way. We want jobs, we want education, we want choices, we want our children back. I know some of my post issues you know I have $20 000 worth of child support debt that’s owed because I was enslaved. I can’t get a passport. I can’t leave this country. You know I, there needs to be more start up money for survivors who want to start their own business, you know I had to invest, I’m in current debt right now because I started an LLC on top of the non-profit. You know I had to have money in order to get that going. I know that funding is huge. I have to work tirelessly to try to make sure that our non-profit, me and the small group of volunteers that we have doing fundraising, you know. Working tirelessly to make sure that these applications that we have around the world of survivors needing services are able to be fulfilled. But some of these bigger NGOs are getting it and only putting 12 cents to the dollar towards direct services. That’s not okay. That’s not okay. We need more direct services, we need more resources, we need more opportunity. We need more choice.