Laura had been raped and trafficked by a previous boyfriend who had also gotten her addicted to drugs. Laura managed to get clean, return to school and met a new man with whom she became good friends. Her friend told her he was going to Chicago and offered to take her with him. She thought it would be a chance for a better life away from Omaha. However, after arriving in Chicago, Laura’s friend stole her phone, beat her up and told her that she now has to do everything he says.  Subjected to physical and sexual abuse daily, Laura was moved around the country several times and forced to provide sexual services before she was able to escape and return home to her family. 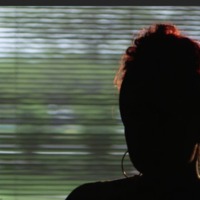 We went to Chicago and the whole drive, such a gentleman, nice guy you know. And never would I have guessed what was about to happen to me. I’m sitting in the car, he’s like “Can I use your phone really quick?” and you know, being really naïve and young, just passed him over what I would call my lifeline. Oh, here you go. Follow him inside, and um, it’s one of those brick duplex houses so it’s like probably four different little apartments in one house. I remember like going, in and like as we’re about to go downstairs he just turns and he punches me in my face. And I feel like the blood just running down. And he just looks at me and he’s like, “Don’t do anything stupid. Do whatever I tell you to do.” So I’m thinking in my head like, what the, what is going on? What is he talking about?

We get down the stairs and it’s a bathroom. Pulls me into the bathroom he just starts beating me up, I mean you would have thought I had stole something from him, or I had did something the way he was beating me up. Like I was, like a man. And I’m sitting here thinking this is a grown man beating me up. Like it was nothing. And he tell me, “Do whatever I tell you, you know what this is”. And he’s basically telling me in the shortest amount of words, like, “you’re a thoroughbred”. From there I was thrown in a room with another girl. Concrete floors, real dark, it had like er little red lights, I remember these little red lights and it was like err bed built into the wall, but there’s blankets, and the other girl, she didn’t talk too much. I had kind of found out that she was from Florida. She was there from school and she met a guy.

And that whole time was a blur being drugged, beat, raped, repeatedly. I mean, you would wake up and it was the next guy. And you would just pray the next guy was nice or pray that they would use a condom. I remember every time the door would open I would cringe. Because I didn’t know if I was going to get beat, I didn’t know if this next guy was going to be violent. I just, I never knew. You had not control of your life or what happens to you. You’re officially in ownership of someone else. You’re a product, you’re cattle. And what’s so crazy about it is he had my phone. He was using it to contact my, like when my parents would contact me, he would text as me. And if they would call too much he would give me the phone but before anytime he would give me the phone he would threaten me and say, “Remember, I know where your family lives and remember I will kill your nephew.”

You don’t know how many days you’ve been passed out because sometimes they would beat you so bad that you just go unconscious. Or you’d be so drugged up you don’t know. But I do remember one day they came in and he told me, “we’re leaving”. And I was like, okay yes, I’m gonna go home, this nightmare is over. I did what I was told, I get a chance to go home. And he said, “No, we’re going to South Dakota”. And we get to South Dakota and it’s like, how do I explain it? They would call it like a trap house. I mean, there’s drugs, there’s prostitution, there’s gambling, lottering, you name it. Everything is going on in this house. And the cycle begins all over again. One John after the next John after the next John, after the next John. And then when you think you’re done, then you have all the pimps and them, you know, they take their turn at you, and whoever else wants to take their turn at you. Women, it didn’t matter.

And I kind of had become accustomed. I was smart, I never you know, back talked. They asked me to do something, I did it. I cooked, I cleaned, it was like slavery, like slave days. Just modern day, you never would think, driving past this house, there are girls in there that can’t leave against their will. We’d go to the grocery store, it’s be like a couple of us, we had to go to the grocery store across the street. We’d go in there and he would watch us. I mean literally watch us like a hawk. Get the groceries, come back.

And then I was told, informed by the guy, we’re leaving here, and when we leave here everything’s staying here. We’re leaving your phone, we’re leaving, no one’s gonna know where you go. And I knew this was a turning point. If I didn’t do something, or if I didn’t try to run I could disappear and I wouldn’t be sitting here right now. I knew what disappear meant. I knew what that mean and I just didn’t feel like giving up yet. I’m not gonna lie, there was a lot of times where death seemed a lot better than what I was living. But I had become so numb to the, to the men beating, and just doing whatever they wanted with me. It didn’t bother me no more. And that’s a scary feeling when someone can come in there and punch you in your face, beat you, rape you, try to mutil…do all that stuff to you and it and it didn’t matter anymore. I didn’t care, I didn’t have like a, you lose your sense of worth. You don’t feel like a human being. And I think that’s the biggest thing with a lot of trafficking victims that people don’t understand.

In my head I had like this bright idea, and I made like some crazy story about my phone, needing a charger, and the gas stations right here. And like, he’s like, here’s the house. And there’s this big fence and then there’s a gas station. Get my purse and I know it was God, or I knew it was like some adrenaline because I get over a fence, and as athletic as I’ve ever been in my life, I have never been able to climb a fence. But that day, I got over that fence.

My dad walked right on in and I just remember like getting up and like running to my dad. Like I can’t explain the feeling of seeing my dad. The next day my mom and dad took me to the ER and I just remember all the tests, and they’re looking over my body and everything that was wrong with me. Truth be said, I pray I can still have kids, after the damage that’s been done to me. But the physical damage doesn’t compare to the mental and emotional damage that I had for a good three months. May be three to five months. I didn’t want to leave the house for nothing. If my parents weren’t going, I wasn’t going. It was just real, how can I explain it? It was just like shell shock. Everything scared me. Everything frightened me. And then when we find out what they get charged for, there’s no kidnapping, there’s no sex trafficking. There’s none of that. It’s all drug. And they did their time served. They got their little slap on the wrist, got probation. And they were on about their lives.

I had some who would come in and they’d be very timid and very concerned. Like looking at me like why do you have all these bruises? Why are you beat up? But in the end, they didn’t care. They were there for their fix. They were there to do what they wanted to do. And it’s funny because people always think “Oh, men who buy women are not these professional men”. And I’m telling people now, I had lawyers, doctors, you name it, there’s no discrimination. And it’s sad because, I had law enforcement. So when you think about the big picture, it’s just for anyone to give money to pay for sex is sick.

If anybody can take anything away from my story is, it could happen to anybody. And hopefully it opens peoples eyes that they start to be more aware of their surroundings and what’s going on. You know, maybe it will make a mom check their daughters’ facebook more and stuff, you know. My biggest thing is I share my story for awareness so that there won’t be another me. Or I can save another girl’s life and give a mom hope. Give a dad hope that their child can make it through it.