There are an estimated 57,700 people in modern slavery in the US according to GSI estimates. The US attracts migrants and refugees who are particularly at risk of vulnerability to human trafficking. Trafficking victims often responding to fraudulent offers of employment in the US migrate willingly and are subsequently subjected to conditions of involuntary servitude in industries such as forced labour and commercial sexual exploitation.

Sakura was in sixth grade when she was first raped. Many more followed, bad relationships and alcoholism were the norm. When her job took her to Kansas, Sakura met a man she thought was perfect. They went on their first date and the next day he moved in. It was at this point he began controlling everything Sakura did. 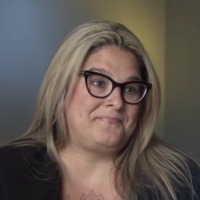 Currently, I am a crime victim advocate here at the Sarpy County attorney’s office.  We keep them informed of what their rights are as a victim or witness but also where the case is going, what the movement is.

We go on our first date and we go to a little concert in Lawrence. Then we go back and we sit in a park and we’re swinging and having a good time and then we go for a walk in the neighbourhood. I mean to me that’s like the perfect date. The next day he’s at my house and he’s moving in. and it was so weird because again, I’m two and half hours away from anybody I know. So this is all new to me. From there, he controlled everything I did, made sure that he knew where I was at all times. I could not move in that town without him knowing exactly where I was. Even when he would be out of town for work or whatever, he knew where I was at all times. So I know he enlisted some of his friends in his activity. He signed us up for some swingers club and we were gonna go to some convention or get together in Kansas City that they were having. I just remember leading up to that, we started frequenting the strip clubs. There were two of them in Topeka at the time and we went to one quite frequently and would spend like entire paychecks there. And buying lap dances from the dancers and he’d talk them into doing some extra things while they were dancing.

Going to those, I don’t know what they’re called, sex shops. And I can remember going in the back of one, in particular. And they had these booths in a row where you could rent videos and watch it in there and do what you do.  But they had big windows so people could see in there and I can remember we had to have sex in there and allow other people to watch.

Again, while this is all going on I’m thinking, this is horrible, I hate this, this is not me but I’m stuck. I don’t know where to go I don’t know how to get out. So you have to do with it because standing up to it, saying no, that just gets you beat. He knew where to hit and how to his so it wouldn’t be visible to my coworkers or to anybody else. And there’s a lot of ways that you can essentially torture someone without leaving a mark. He did a really good job of doing that. He had a gun in my apartment and I hated guns.  I just don’t feel comfortable around them and he would purposely take it out and clean it in front of me with it pointed, the barrel, right at me. He never directly threatened me with it but he made sure I knew that it was there.

Having to have sex in these back rooms, whatever. Other people watching, whatever. And then it escalated to having to have sex with other people. And that was when the swingers thing came in.  Thankfully that didn’t happen too much, but once is too much. As you can tell just thinking about it, it’s hard because who does that to another human being? And all the time he’s telling me he loves me. Yet he’s doing all of these horrible things to me. I did not know what to do to get away. He was physically violent with me, stalking me. The sexual abuse I mean, I know the inside and outside of every strip club between Topeka and Independence, Missouri. And all of the sex shops all along the way.

I would put my check in, he would take the money out. And then the only way I could get my money back to pay for rent was, we’d go to these sex shops, these strop clubs, we did the swingers thing, we called those 800 numbers or whatever those number are for phone sex. We were doing all of these things and I didn’t have a choice in this. You do it or you get beat. So you’ve got your force, you’ve got your fraud, you’ve got your coercion. And then of course the interstate because it was between Topeka and Independence, Missouri on Interstate 70. Again at that time I’m not thinking this is trafficking and this is really horrible, I’m just thinking this really kind of stinks but I’ll get through it. I literally had to essentially turn tricks to get my money back.

I think the intrigue, or however you want to call it, is the same. You’re targeted. The person, they’re looking for targets.  They’re looking for that vulnerability.  I don’t consider it a weakness. I may have at one point considered that I had weaknesses, but I think they’re looking for that vulnerability. My trauma history created a huge vulnerability, whether I realized it or not. In my mind at that time, my only option for getting out of that situation would have been leaving my job, leaving my apartment and just leaving my possessions and just grabbing my cats and getting in my car and going. The thought of leaving my job, something I felt I worked so hard to prove to myself and to others that I can do this. And everything that I had, I had worked for. And it’s so difficult to walk away from that. I felt like I’m stuck.

In certain light I can see the scars from when I cut myself to get away because I didn’t know what else to do. But that was my main addiction, was cutting.

And we’re watching it together and we see the second plane hit and I realized at that point, I need to be with my family. I need to figure a way out of here. He had threatened, “If I can’t have you, nobody will”. So I was concerned for suicide as well as homicide. And he had the gun so I know he had the means. So we go to file a protection order and half way through the paperwork, I just remember looking at my mom and saying, “I just gotta let him go”. Me filing this, he’s gonna maybe try to fight it. He’s gonna be living half way across the United States. I just gotta let him go. And the whole time he was moving he called. I felt bad for him. Like this is my fault. And then he got to Florida and within about a couple of months I was able to finally just break it off. Emotionally break it off. The physical part was not a problem. But the emotional part, I had to do that and changed my number and haven’t heard from him since.

Oh yeah. I do. But I can’t think of anything that the criminal justice system has to offer for me in this case, that any system honestly has to offer. I can’t think of anything that would make me feel better of anything like that. I would not go back for anything because those experiences have put me in this seat today. To where I can talk about the horrible things that human beings are doing to other human beings. And hopefully even one person is going to listen to my experience and believe me and realize yes, this is horrible, there’s something I can do in hopes that somebody else does not have to go through this.

What I’m doing is not about me. It’s about my daughter and that generation. It’s about other thousands of women and children that are subjected to this every day. Even when I’m deeply saddened by some of the stuff I’ve experienced, and as much as it pains me to actually talk about my own personal experience, it’s given ne the energy to say stop. This has to end. We can’t expect to sustain ourselves as human beings I we are continuing to do this. This is some of the worst stuff that you can do to another person and it’s easily stopped.

[Sakura is asked if she thinks any progress is being made]

Yeah. I think we are because we’re talking about it. We’re sitting down right now, you and I are having this conversation about it. Something ten years ago, that would not have happened. You know, people are definitely becoming more aware. But again, so many people are so good at distancing themselves that think I don’t know anybody that does this. I don’t do it so it’s not about me. We distance ourselves from others and by doing that we’re going a huge disservice. And every single one of my friends that I have had deep conversations about this and other people that I have talked to, it’s amazing that as soon as people know that you are aware of what trafficking is and what it looks like and what’s happening and you are open about what you have learned, people will come out of the woodwork and want to ask you questions. And they’ll be like “Oh well so and so down the street…” It’s amazing by just becoming educated, how that opens up the door for conversations.