Uganda remains a source, transit and destination country for men, women and children subjected to forced labour and sex trafficking. Ugandan children as young as seven are exploited in forced labour in agriculture, fishing, forestry, cattle herding, mining, carpentry, bars, restaurants and domestic service. Girls and boys are also exploited in prostitution, with recruiters targeting girls and women between the ages of 13 and 24 for domestic sex trafficking. 54,000 girls under 18 are sex workers in Uganda. Lured by false promises of education and good jobs. Others are escaping poverty, sexual abuse and child marriage.

Jacqueline was 11 years old when her parents sent her to the city to get an education. However, the person she was living with was not working and she found herself forced to work as a sex worker in the evenings in order to pay for school. 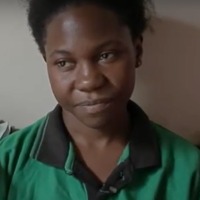 I was working as a sex worker in the evenings, but I used to go to school. I was paying my school fees. I was 11 years old. My parents had sent me to the city but the person I was staying with had no job by that time. So my friend told me that there was a job available.

There were many girls. The youngest was 9 years, so I wasn’t the youngest. The men look for girls who are young, because young bodies have no diseases like HIV and other diseases.

I want to be an electrician because we can earn money without suffering. We can just repair a TV and earn money.