Nicole was 17 when she fell under the seductive spell of a man who would lead her into prostitution and keep her there through threats and beatings. Nicole was estranged from her family and friends and didn’t initially trust law enforcement to help her. Nicole was eventually helped by an FBI Victim Specialist get away from her pimp and later testify against him. 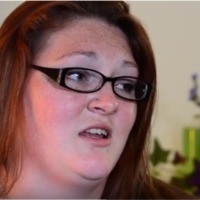 He was gorgeous, and he had charm. I just wanted someone in my life to show me attention for a change, instead of being ignored. He made it possible to where I was like, I went shopping and then the next morning he told me about how I can make some really good, fast, easy money and I was like, OK. I’ll try it. And then he put me out on the street. And I came home with $750. It was kind of exciting because it had the thrill of hiding away from police when they were around. I don’t know. Its just there with this excitement, like adrenaline rush kind of thing in the beginning. About seven months afterwards I had gotten raped by a John and Juan didn’t believe me. And so that was my first beating. And it wasn’t so much the beating. It was I got pepper-sprayed and put into a shower for three and a half hours. A cold shower. And I tried to leave and it just turned out to be worse.

I was strong. But I wasn’t strong enough. And the more I stayed, the more I got weaker. I felt like there was a medallion just hanging in front of my face the whole time. Still to this day I can’t figure it out. Because now it’s been so many years I’ve kind of figured out how to get back to being Nicole again. And I can’t see how I let that happen. It just, it happened, and there’s nothing I can do about it now. And I know that I’m a good person. I know that I try to do good by people. But when people find out about your past and they find out about what you did, they don’t really look at its victimization, they look at it as you slept with guys for money, and you chose to do that. Most girls don’t choose to do that. They either get beaten into it or they get traded for it or they get into drugs and that usually does it.

I wish that I could show a different outlook than what they’ve seen a part of it. Because some girls, when they get involved in it, they don’t get to see all the gory and nasty bad stuff at first. Sometimes it comes later. So I just wish that I could just show them all the bad stuff that’s going to happen if you keep persisting with this.

I think if it wasn’t for Dani being so persistent and staying on top of me then…she just, she was there. Whenever I needed someone she was there. She made sure that she helped me as much as she could. At least to get me on the right road instead of keep going this way. Its been six years since I haven’t been in that part of the life, and I still come across some struggles and some parts that kind of get me down a little bit. But I realize everything I’ve accomplished in the last five years, and that kind of just keeps me going. I am very, very proud of myself. Every time I do something good there’s two people that I call immediately. It’s my lawyer and Dani. Kind of like, “Guess what I did today”. When I got my very first off-the-lot car I called both of them and said guess what I got. Because I was so proud that I built up my credit that much. So I’m very proud of myself.