Danesha,14,  was walking home from school when a car pulled up beside her and asked if she needed a ride. When she declined, the driver got out, pulled out a gun and forced her in to the car. After driving for a few hours, they arrived at a house and Danesha was told that she was going to 'hoe' for the guy that had taken her. One day, Danesha went to a police officer while she was on the street and told them what had happened to her. Though she was returned to her mum, Danesha went back to prostitution, leaving only when she became pregnant at 16 years old. 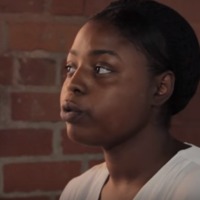 I was born to my mother when she was 14 going on 15, my father was 19. Erm after I was born a lot of things went down. My father was distant, my mother was an alcoholic. She had a boy, my first brother. His father was more of a father to me, she broke up with him and starting dating another man who molested me when I was 8. When I told my mother they didn’t really seem to really get the idea that there was something really wrong with that. Then I told the school cause they put me in counselling, I told the school and they kept me there that night. And they told me they tell, they brought CPS, police and all of them people in. I had to demonstrate to them what had happened to me, which was hard because my mother was in the back screaming. They put me in different foster homes until they placed me with my biological father. The relationship I had with my mom caused me to go on suicide watch. I kind of got passed that after I noticed a pattern in my mother’s behaviour and I noticed that she wasn’t going to change. She got pregnant by my molester. So my youngest brother is fathered by my molester. Which is another secret I have to hide and hold, which is hard on me.

When I got, when I turned 14, I decided to stay a little late at school with some friends and chill. They decided to go their separate ways and I decided to go my separate way on my way home. There was a car that pulled up, it was a brown Cadillac, 4 door, it pulled up and he said ‘hey need a ride?’ and I was like no I’m kay, you know. He said alright and then pulled off, then he came back around. And when he came back around he pulled out a gun and was like ‘get in they car, get in the car you’re going with me’. And you know I got in the car, I was terrified for my life. I’m not about to run cause I’m going to get shot. So when I got in the car he pushed my head down and he was driving for hours and we finally got somewhere and there was like a big lady that he called, well he told me to call her Mama Strawberry. And she had a house full of kids, I dunno everything just didn’t seem right. And he was like, ‘you’re going to hoe for me’ and I didn’t know what that was. He explained everything to me, the rules, everything like he was, he was the gorilla pimp. And I kind of learned, I kinda got in it through the hard way. Other girls got in it because their friends told them, or you know things like that. But I was forced into it and it was kind of harder, especially with someone who didn’t care about your feelings, or if you ate that day or anything like that. And he was just like, you’re gonna watch these girls out here and you’re gonna do what they do. Which was on International Boulevard and all I had to do was go. If I didn’t come back with any money then I knew something else worse was going to come, so I had to do what I was told. But as I was doing that he’ll only take me out at certain times.

I kind of studied the police schedule. I seen what streets they go up and whatever, and one of the streets I knew the police was going to turn down and he’s seen me and he stopped. He asked me what I was doing and I told him everything, I told him my name, I told him everything that was happening. So they take me to my mom and you know and we get reacquainted and stuff. I thought it was over there, whatever. Erm but for some reason that life that he showed me to that kind of, it kind of grabbed me. I felt the freedom. I didn’t really feel love at home but when I was out, anyone could love me you know, just for what I have. I’m giving a piece of myself for someone to love me because I’m not getting it at home. You know, so it came a little bit more easier for me. And I guess like, I don’t know, I would just get caught and go to jail. Over and over and over again. I kept just going back in a cycle, back in a cycle, back in a cycle. I didn’t really understand what was going on with me or why I couldn’t stay put at home. Every time I got home, everything would just overwhelm. I loved my youngest brother but his father is always around. I love my mother but she just gets drunk and goes crazy on people for no reason like, I don’t know what to do.

I got pregnant at 16, I had a friend, a white guy, he was older. He sold weed to the cannabis club so that was like my best friend at that time, but like you know. We had sex for the first time or whatever and I get pregnant. I’m thinking, this is the only guy I’m having sex with. It’s not I’m pregnant and I have the baby and the baby looks exactly like this man. I’m like there is no doubt that this is his baby. Basically had a baby by a person that she will never know or hear from. I didn’t know what to do, or how, if I was going to keep the baby or let it go. Or if it was actually going to change me or make me worse or if I was going to be a deadbeat mother or a great mother. But I couldn’t do anything but try you know. And it was like God was sending me, or someone up there was sending me too many signals to get out or they’re showing that this door is opening for you but you keep walking by it and you’re not getting in there. I didn’t go back into prostitution, I was like this is my baby, I have to do something. This is someone who is going to love me for me and I don’t have to do anything but give her a kiss and a hug, you know. And it was so wonderful and like, I don’t know. She changed my life a lot.

Narrative courtesy of Not for Sale