Benjina Island lies 400 miles to the north of Australia and has been the home of an illegal fishing operation for a number of years. While only one company was registered to use the island, investigations by labour rights organisations has found that the island acted as a port and base for fishing operations across the region. The island functioned as a makeshift prison, with small cages found where trafficked fisherman would be kept if they clashed with their employers or asked too many questions. It was when the Labour Rights Promotion Network joined forced with the Associate Press and Thai TV Channel 3 after hearing stories from survivors who had escaped the island, mounted a search for the island that they found shocking human rights violations.

Chairat was trafficked on to a Thai fishing boat and then found himself imprisoned on Benjina Island where enslaved fisherman were imprisoned, forced to fight and were often killed. 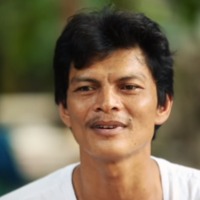 On this island it was nearly impossible to contact the outside world. So they can cover up any kind of illegal activity. In jail I met many people. Cambodians, Laotians and Burmese. When their boats came they were beaten and imprisoned by the company until another boat came.

Thais, Cambodians, Laotians, Burmese and even Indonesians were among the dead. No one came to write a death certificate or anything. They were taken to that place and put in an unmarked grave that could remain a secret.

I got my life back. It took two months for all the documents to clear before we could leave Benjina Island.