The Democratic People’s Republic of Korea (North Korea) is a source country for men, women and children who are subjected to forced labour and sex trafficking. Government oppression in the DPRK prompts many North Koreans to flee the  country in ways that make them vulnerable to human trafficking in destination countries. Many of the estimated 10, 000 North Korean women and girls who have migrated illegally to China to flee abuse and human rights violation are particularly vulnerable to trafficking. Some lure, drug, detain or kidnap North Korean women on their arrival, others offer jobs but subsequently force the women into prostitution, domestic service, or forced marriage. If found, Chinese authorities often repatriate victims back to the DPRK where they are subjected to harsh punishment including forced labour in labour camps or death.

Mee Yon was heartbroken after the death of her child due to starvation when she decided to flee to China. After crossing the Tumen River in to China Mee Yon followed people who she thought were taking her to a job where she could make a better life for herself and her family. However, after arriving in a rural village, she was told a Chinese man had paid for her to be his wife. Mee Yon attempted to escape to South Korea but was caught and taken to the investigation department and returned to North Korea. 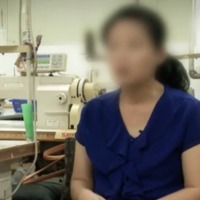 I gave birth to a baby, but the baby died of starvation after his first birthday. How can I describe the broken heart of a mother who has lost her child? However, this is really common in North Korea.

When I crossed the river, there were two people with me, my brother and a lady who was staying with us. It was April 2 and I was wearing work clothes. The water was icy and the river was really deep. Escaping from North Korea itself meant risking our lives. But I thought I would rather die escaping than painfully wait to die of starvation.

It was my first time in China so I trusted those people. I followed them thinking about the money I would make. A man and I took a taxi and went to a rural village. After getting out of the car, he told me that the man standing in front of me was now my husband. I strongly objected and told him that I wanted instead to go back to North Korea after making some money. But he told me that I should follow the man because he had paid for me. He told me that I couldn’t leave. And I know this has happened to other people. That’s how I got trafficked in.

We were captured fleeing to South Korea, so I was taken to the investigation department. They beat me for lying. Then they told me “You will never get out of this place, you will die in pain”. I stayed there for six months.

There are lots of North Korean spies here. You know, I am doing this interview because I trust the person who introduced you to me. Otherwise, I never go anywhere. I am not afraid of being killed, but I have a son to take care of.