Tricia Grant was approached by two men offering a way for her to make some money to support her son. However, upon arriving at the address she was given, Tricia was forced to provide sexual services against her will. The men threatened to take away her son if she refused. 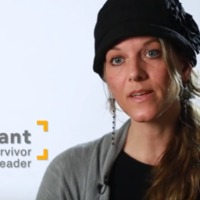 When I was 15 I was at a local restaurant in Auburn and I was having a conversation with my friend who is the same age as me and they overheard us talking about money and how important my son was to me and they approached us. It was two men, they approached us and said, ‘hey we overheard you talking about needing to make some money and would you be interested in something we have to offer you?’ So we literally both looked at each other and shrugged and said sure.  So they said go to this apartment. The next day, this brown apartment building in Auburn and meet us there. So we did, and that was the trap. They forced us to do things and they told us that if we told anybody that they would have my son taken away from me because they knew how important he was to me. That was all that they needed to say to me.

I had a very rough childhood from the beginning. I was drowned as a baby, somebody tried to drown me as a baby and then my mom took my brother and I, had moved us away from everybody that we knew, and my brother took care of me, he’s only four years older than me, because my mom had to work. And in that time I was sexually abused and I might have been sexually abused before that. But family secrets so I don’t, I don’t really know.

Like I had a lot of bruises on me and stuff that people were questioning so I just told them I was dancing, it’s all I told them and nobody questioned it or said anything or nothing.

I was a teen mom and I did bring my son to the doctors and I thought that maybe they would pick up on something or see that, or ask questions. And I think that that’s the biggest thing I talk about, was just be interested in teenagers, be interested in learning who they are and what their lives are like, even if they seem on the outside hard and like they have this shell that you know, they don’t want you to interact with them, you know. And we don’t want to live in that brokenness that we’re in, but if nobody engages with us and asks us what’s going on in our lives, that’s the simplest most basic place to start is just wanting to know.

Police officers are usually the people that are going to see them at their lowest, lowest point. And I think that for them they have the hardest time wanting to do something and looking outside of that box because they’re free, because they are so broken and what can I do? What can I contribute? What can I help? I can’t do anything.

You might not be the right person to save them, but you can help them. You can be that first person to care enough to say I want to help you but I don’t know how. So I’m going to point you to this person that I trust and that I know that can help you.

I think in particular with law enforcement, I think a big reason people don’t come forward is because there are police officers that were purchasing us for sex, and for whatever they wanted. There were police officers there so who are you going to go to?