There are an estimated 328,000 people living in conditions of slavery in Kenya (GSI 2018). While Kenya has committed to eliminate child, early and forced marriage by 2030 in line with target 5.3 of the UN Sustainable Development Goals, 23% of Kenyan girls are still married before their 18th birthday. According to UNICEF, Kenya has the 20th highest absolute number of child brides in the world. Forced child marriage is driven by gender inequality with the belief that girls are inferior to boys. It is exacerbated by poverty, natural disasters and cultural traditions such as female genital mutilation and Samburu whereby a close family relative will approach a girl’s parents with red Samburu beads and place the necklace around the girl’s neck as a form of engagement.

Amani was 11 years old when her parents told her she must undergo female genital mutilation and get married. After refusing, one night four men came and took her away to a market. Luckily, World Vision were able to rescue Amani from her situation, however, when she returned to her parents two years later, the same thing happened again. Amani ran away to Nairobi, and there was taken in by HAART Kenya. 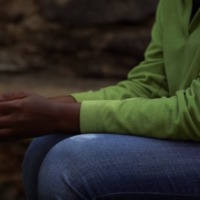 My past has shaped me, but it does not define me. This is my story.

I was born in a polygamy family. My father had three wives. My mother was the third one. During that time my father told me that he was not my real father, but I never asked my mum who is my real father. Since that time, I started suffering. My father used to threaten me in front of my sisters and siblings. Then my sisters and brothers, they started to hurt me because they were saying who is your father? I stayed with them, until when I was 11 years old they forced me through FGM, but I refused. They wanted me to get married, I refused also.

It was during the night my father and my mum were not at home, four men came and they took me away. I cried but they were strong. They took me to a market, to a bus station. They told me to stand there as I saw them look for a car. I saw a car which was written World Vision, the people who were in that car were helping to rescue me. Then I went with them to the organization and I stayed with them.

After two years my family they came and they asked forgiveness from the manager, the owners of the organisation and said that they would take me to school and everything they were doing in the past they would not do it, but I refused to go with them, but the World Vision told me to go.

I stay with them for about two weeks and the same thing happened again. I ran away from home, I went to stay with my uncle for about two months. His wife always was not on my side, she said that you go back to your parents. Then I went to stay with my step brother who was, he was my step brother and was living in another place. Actually I’ve stayed with all my relatives. I went and stayed again with my sister. During that time my father was the one who paid the school feeds so it was considering this money which was to be paid for my school fees.

Around August 2015, I decided to escape from home because they were abusing me for many things. So from that time I decided just to go. If I get help okay, if I die it’s okay. Since I came to Nairobi because I had my cousin who is living at Nairobi. He took me to equity bar, we went there and explained everything to the senior manager and that lady said she is going to bring me to HAART Kenya. Then after there I went to a school, so I’m waiting to go to school this year, September. HAART is good, it’s a good home, a supportive environment, they have everything, security, food, education, everything. And it’s a peaceful home. I hope to succeed and to help others, people outside who are suffering.