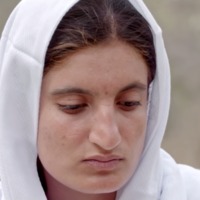 They held me for over four months.

I hope God will punish them for what they did.

After IS captured Mosul, they invaded Telefher. And then they attached our village Gir Zer. Yezidis units tried to defend our territory. They didn’t have enough units and weapons. So then we had to escape.

We [Yezidis and Arabs] lived side by side for as long as I can remember. We were attacked by them. All of our Yezidi girls were abducted. This was mostly done by our Arab neighbours.

All the Yezidis were gathered in one area. An IS member told me to get up. I asked my father what he’d said, because I don’t speak Arabic. My father translated it for me. The man said my father had to shut up, or he’d kill him.

They came by regularly to pick out and take away the prettiest girls. I knew what they did to those girls and that it could happen to me.

There were about 30 IS members on the base. Some were sleeping. When I noticed that, I phoned my cousin in secret. Two of them were patrolling on the roof. They were busy with their cell phones. Around 11pm I escaped from the IS base with another girl. We walked until 7 o’clock in the morning. We weren’t wearing shoes. It rained and there was mud everywhere. My cousin had explained the escape route to me. We crawled through the valley on our stomachs. Dogs chased us. IS members with flashlights followed the dogs. We hid behind trees. Not until they went back, we continued to flee. We started to run like crazy. At 7am we arrived at the top of the mountain. Mount Sinjar.

[Interviewer: Did you continue from there by car?] No, we were picked up by a helicopter and taken to Darebin, Kurdistan. The Peshmerga brought us to Kurdistan.

I was relieved that the Yezidi community accepted me again. When I heard I was one of them again I felt reborn.

My only hope is that all prisoners will be released. I know that my sister is separated from my mother. What they did to me, they’re now doing to her. She’s just a ten-year-old child. She should be with her mother. They also do it to seven-year-old girls.

Narrative and image taken from a film directed by Reber Dosky as part of The Atlantic Selects, a showcase of short documentaries curated by The Atlantic.