Lakhwinder was trapped in bonded labour for seventeen years. 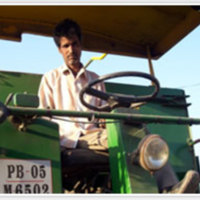 Seventeen years of my life I worked as a bonded labourer, a long period of hardship with lot of physical and economical exploitation. Gone now are the cheerless days when I was a serf. Life is now beautiful with zeal and many hopes.

My father was an illiterate man had a dream to educate me and my other siblings so we could join the government services. Our fortune, however, was not so good. His dreams were shattered when one of his hands was amputated while working as a bonded labourer in a farm house. At that time, I was 14 years old. The farmer turned my father out of job and instead of giving him any compensation for his permanent disability, he demanded a bonded debt.

That year, the heavy rains damaged the roof of my mud house and we had to no where for shelter. My family was also struggling to get any food. In anticipation of the winter season ahead, my parents had no other option than to take me out of school. One landlord Sukhchen Singh of my village offered an advance of Rs.10,000/- to my family to engage in work with him. Though it was not enough to satisfy my father’s existing debt and to repair the damaged house, we accepted it as there was no other alternative.

The landlord fixed annual wage of Rs.15,000/-, and I was to stay at his farm house where I worked as a servant at his beck and call. My daily work included looking after ten cattle, whom I had to feed, milk and clean up after. I also used to tend to his fields, irrigating them and performing many other related tasks. The landlord gave me used clothes and substandard food during the period of my employment with him. I became depressed as I was not afforded any time to go home and see my family and friends. Whenever my father visited me I would weep. He always tried console me by saying “it is not only you, but the fate of every child born into our community.”

At the age of 20 I married, but I couldn’t bear the thought of my children having to suffer as I had. Whenever I asked the landlord about my accounts (paying off my debt), he used to laugh and say that I couldn’t repay it in my entire lifetime, as it has already exceeded Rs.40,000. I worked for him for 17 years. I felt that God has made me for the landlord and believed that whatever he said was the rule.

In 2003, Volunteers for Social Justice organized a meeting in my village, and my father got chance to attend it. Through him I learnt that bonded labourers such as myself could be freed and that they could be discharged from the obligation of paying a bonded debt. Thus, when the opportunity arose, I deserted my work and went to the VSJ office in Phillaur, around 100kms from my village. They provided me the legal assistance to liberate me from bonded labour. As the legal proceedings took a long time, I had no place to live as I could not return to my village. VSJ provided me food, shelter and medical aid, and I stayed for around three months in their office. During that period the landlords of my village threatened my family in a bid to bring me back to work, claiming that they would have to pay the price for my escape.

After three months, however, I was able to return home as a free labourer with out any fear. My actions encouraged other twenty five other bonded labourers in my village to follow the take similar action. We are all now free and we are all united. The landlords have since changed their ways. Many of them have voluntarily waived debts of the bonded labourers and made the working terms more congenial. The message of our liberation spread in the area and through me, many bonded labourers have been identified and released.

Now, I am capable of meeting magistrates, police officials and other officers in my district for the redressal of grievances of people in my community. As a free labourer, I found employment on a combine harvester as helper. My interest in this work has seen me promoted to the position of foreman of the combine, and now I repair and operate my combine harvester. What is more, my monthly earning is around Rs.12,000 and I am carrying forward the dream that my father had for me; I am giving education to all my three sons and daughter.

The people of our community have lived in slavery for centuries, our children too would have had similar future if VSJ hadn’t worked in this area. Their support has enabled us to live with freedom and dignity. Our children are in school and I hope one day, they will become good human beings.

Narrative and image provided by Volunteers for Social Justice