There are an estimated 171,000 people living in modern slavery in Nepal. Within Nepal, bonded labour exists in agriculture, brick kilns, the stone-breaking industry, and domestic work. Sex trafficking of Nepali women and girls increasingly takes place in private apartments, rented rooms, guest houses, and restaurants. Nepali and Indian children are subjected to forced labour in the country, especially in domestic work, brick kilns, and the embroidered textile, or zari, industry. Under false promises of education and work opportunities, Nepali parents give their children to brokers who instead take them to frequently unregistered children’s homes in urban locations, where they are forced to pretend to be orphans to garner donations from tourists and volunteers; some of the children are also forced to beg on the street.

In 2015, two massive earthquakes hit Nepal, killing nearly 9,000 people and injuring tens of thousands of others.

Maya and her family were left vulnerable after an earthquake and a woman attempted to traffick her from Nepal to India. 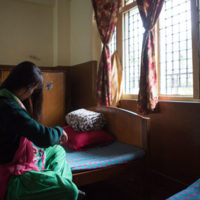 Everyone shouted “Earthquake!” All the houses collapsed and the entire village became dark. All the water sources dried up, there were many landslides.

For around three, four months we six siblings lived together on our own. A woman approached us and said, “You don’t have enough to eat, you are living in such poor conditions.” She said she would get us employment in a hotel and asked us to go with her. At the time there wasn’t enough food, living in a temporary hut was difficult, it rains so much in our village, our roof used to leak. She was an old woman I did not think she would harm me. I trusted her.

[The woman attempted to traffic Maya to India, but she was intercepted at the border. She now lives and works at a shelter.]

I want to do this, I used to do farm work in my village, this work feels the same.

Narrative and image provided by UNICEF