According to Girls Not Brides, more than one third of young brides live in India. In the states of Jharkhand and Bihar, 50-60% of girls are married before they turn 18.

Reena was forced in to marriage before her 18th birthday. 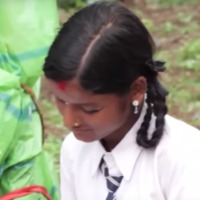 When I was studying in the 9th class, I suddenly got a message that my wedding had been fixed for August 15th, 2012. I felt like my dreams had been shattered. I had thought I could be a teacher or stand on my feet. That dream was finished.

I have a large family and we are five sisters. My father is very poor, that’s why he felt if I get married early then I will ease the way for my four younger sisters.

I asked my in-laws only if I study I will get married. If I can’t study, then I won’t marry. My in-laws agreed to let me study as much as I wanted.

I was married before I was 18 but I will make sure my four sisters are educated and not marry before 18.

I am now studying in 10th class and I want to keep studying and become someone. I want to stand on my own two feet. I haven’t left my studies and won’t leave them until I am independent.

Some names in this story have been changed to protect identities.

Narrative provided by Girls Not Brides. Original video by Breakthrough