According to the Global Slavery Index (2018) there are an estimated 47,000 people living in modern slavery in Guatemala. Guatemalan men, women, and children are exploited in forced labour within the country, often in agriculture or domestic service, and in the garment industry, and domestic service in Mexico, the United States, and other countries. Indigenous Guatemalans, including children, are particularly vulnerable to and exploited in forced labour, including in tortilla making shops. Guatemalan children are exploited in forced begging and street vending, particularly within Guatemala City and along the border with Mexico.

8-year-old Fatima has to work on a coffee farm fetching water in order to help her mother earn enough money. Fatima’s mother described how “we leave at 6 or 6:30 and we work until 3pm. She takes care of her little brother. When she’s not doing that she’s helping me work. When we finish watering coffee plants, we pick up wood. There are times when I don’t have enough. This is why I couldn’t send her to school this year. She wanted to but I just couldn’t pay for that. Fatima has never been in school. I think she would be a good student so she could learn a lot. She could go forward and support her family in the future.” 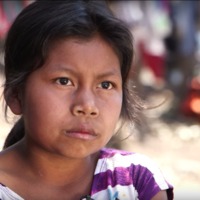 My name is Fatima. I am 8 years old. I will walk for 9 hours today. I walk to water the coffee plants. Carrying water makes my head hurt. My mother and I make 30 Quetzals [$5,00 CAN] a day. It is not enough. I love helping my mom. But I wish I could just stay home. The house we live in is not ours. Me and my mom have to work hard to stay here. My dad is too sick to work. I bring him tea so he feels better. We work all the time. Coffee is my life.

Narrative and image provided by No Child for Sale