Abuk Akot Wol was kidnapped one morning and taken to northern Sudan. She tells of her experience. 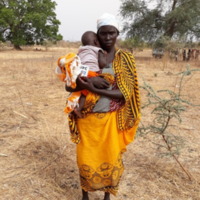 I was kidnapped in Mabior Anguei of Aweil north county, it was early in the morning about 8 AM. We saw people coming on horse back and camels, when we stood up  for recognition and trying to run away, they soon arrived and ordered us to sit down in cluster and they tied our hands into single rope then they started burning our houses and neighbors’ homes too. They shot down five people who tried to resist, we were taken, 15 people in number; men, boys, girls and women. On the way, some of the people who became tired were tied behind the horses to full them along, some died of pulling and the rest accepted to walk.