Makuom was born in Akoch Atong Mabil village, north of Aweil town. As a young boy in 1980s his father enrolled him in a school near his village, but a few days later, news was everywhere that Arabs were planning to attack Dinka tribe villages. His father pulled him from school and kept him at home because he was so afraid of Arab attack. At night during the dry season, Arabs attacked his village. Makuom ran and hid in a nearby forest. Many people from his village ran to the forest, but Arabs followed them. His father was killed by Arabs and captured him with others. All children who were captured were forced to walk with Arabs to north Sudan. 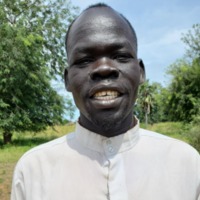 I walked quickly with them because I was so afraid to be killed. They walked with us in the forests. We were lined up in one line where Arabs walked beside us. Every night we slept; Arabs would gather us in one place. They gave us boiled sorghum to eat. It was not enough food, but we cannot complain or say anything. 4 Dinka adult men were killed on our way to north Sudan. They refused to walke. Arabs shot them dead.

When we arrived to Kiir Adeem, Arabs met to discuss how they will distribute us. I was given to Adam Musa, Arab master. He took me to his Raskanida. He has a wife and 5 children. I was forced to take care of goats. It was not normal life; I was a real slave. I was so worried every day to be killed. I was so afraid. No good food, no clothes and I was not paid for the work I did. I was just a slave. Arab master would beat me very badly if I lost one goat and called me very bad names (Jienge, dirty, monkey). There are many Dinka slave in Rashanida.