Angela Guanzon was facing the prospect of being forced into marriage or being jobless in the Philippines, leading her to seek out work abroad. She thought all her problems had been solved when she in 2005 was recruited for a health care job in California. However, upon arrival her trafficker demanded $12,000 for the ‘opportunity. Her passport was seized, and they threatened to call the police and tell them Angela had stolen something if she ran away. Guanzon was ordered to work for 10 years to pay off the debt at $300 a month. Angela was forced to work 18-hour days and sleep on the hallway floor of an elder care facility in Long Beach. Her exploitation finally ended after a neighbour noticed the signs of labour trafficking and contacted the FBI. 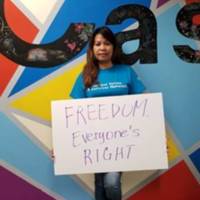 My name is Angela.

I came to the United States from the Philippines on a visa and with the promise of a good job.

The person who got me the job in the Philippines told me the only way to enter the United States is through a P-1 visa, which is for the purpose of performing at a specific athletic competition.

I came to California with a recruiter who brought more than 10 other people. Some had come to compete in a taekwondo tournament in Las Vegas while others, like me, had come hoping to work in the United States.

But when I arrived in California, everything changed.  My passport was taken away from me and I was told it would be held for safe keeping.

My trafficker said I owed her $12,000 for both my transportation to the United States and the visa. She said $300 would be deducted from my $600 monthly salary. To pay back the money I owed her, she said I would have to work for her for 10 years.

I was employed at a retirement home for the elderly located in a suburb of Los Angeles. I worked 18-hour days with no day off, had to sleep on the floor in the hallway, and ate table scraps.

I could not believe the lengths my trafficker went to trick me and how they could so easily get away with exploiting me.

It was clear, I was trapped in modern slavery.

There was a shopping center six blocks away from us and sometimes my co-worker and I would take turns sneaking out to get some Chinese food or McDonald’s. When our trafficker found out, she told us to be very careful walking in the street, especially at night. She said if the police found us, they might ask for our ID, and since we did not have one, the police could take us away and put us in jail.

Our trafficker told us that a lot of requirements are needed to get an ID and we did not need one since we are working inside the home.

My co-worker and I were threatened with deportation if we tried to escape. Our trafficker said she would call the police and tell them we stole something.

This went on for two years.

Finally, I was helped by the FBI after a neighbor noticed that I never had a day off. I told the FBI about what happened to me and eventually, I testified against my trafficker in criminal court. She got a five-year prison sentence.

I now work full-time as a Medical Biller and Coder and I am a member of the Resilient Voices-CAST LA Survivor Network.

I know the type of abuse that happened to me and my co-workers happens to other people as well – you can take action to stop it.

That’s why I’m sharing my story with Freedom United and the Coalition to Abolish Slavery and Trafficking (CAST) to help spread awareness about labor exploitation on California farms.

Under current California Senate Bill 477,  temporary visa workers, such as domestic workers, are not safeguarded and are among the most vulnerable to labor exploitation. That is why we are calling on California to amend this legislation.

By amending Senate Bill 477, all temporary workers would be protected from fraudulent recruitment practices regardless of their visa category.

Based on my own experience and the experience of other survivors in my network, Senate Bill 477 must cover ALL temporary visa categories.

No temporary visa categories should be excluded from regulations to protect workers.

Working caring for the elderly was a hard job but they were like family to me—I worried about them and my own safety all the time when I was working for my trafficker. Today, with so many older people vulnerable to COVID-19 and the increasing need for home healthcare workers, I worry that workers like me could become more vulnerable to trafficking —especially since people are even more desperate for work.

Take action and sign Freedom United’s petition calling on California to amend Senate Bill 477 so all temporary migrant workers are better protected, regardless of their visa category.

No one should be forced to work for an employer night and day, be threatened with deportation, or fear for their own safety and their family’s safety.

Join me today in urging California to ensure all its temporary workers are free from slavery. Together, we can ensure ALL temporary migrant workers are protected so we can prevent them from being trafficked and coerced into forced labor like I was.

Narrative as told to CAST-LA and Freedom United. Visit https://www.freedomunited.org/