Nena was trafficked into domestic servitude at the age of 55. She had already retired from her teaching job in the Philippines and thought going to the United States would be a good opportunity to financially help her family. 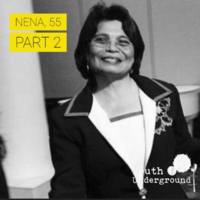 I come from a family of teachers: father, husband, sisters, and daughter. I taught for 32 years at an elementary school in the Philippines. Somehow, that added to the shame I felt for being a survivor of trafficking. I not only worried about what my family would think, but my hundreds of students as well. I thought that everyone would lose respect for us.

When I retired from teaching at 55, I went into business with a neighbor, and they disappeared with my savings. I was devastated, but a cousin through a marriage came to my rescue—or so I thought—when she told me her boss was looking for someone to accompany her elderly mother to the United States and take care of her there.

I met with the woman, and she offered me $400 per month, nearly three times what I could make as a teacher. She added that she would petition for a specific kind of visa so my family could come to the U.S. too. I was overwhelmed with happiness and gratitude. I thought this was the answer to my prayers.

The first sign that something was wrong was at the airport. The Philippines Airlines personnel withheld my ticket because the woman I was supposed to be caring for was not with me. I wondered why the mother had traveled to the U.S. ahead of me, so I called my boss to let her know I couldn’t pick up my ticket alone. She sent her mother back to Manila, and we flew to the U.S. together. In all of my excitement, I didn’t ask any questions about the strangeness of the situation. I trusted my new boss.

In San Francisco, my boss’s younger sister met us at the airport, and we happily ate dinner at her house. Before going to bed, the sister told me, ‘My mom stays with me. My sister used my mom so that she could get you to come here to be her domestic helper. Tomorrow, I will arrange your flight to Culver City.’

I was so shocked that I couldn’t say a thing. My head was spinning from the confusion.

I arrived in Los Angeles, and my boss took me to her condo in a gated community. She was a very prominent, influential Filipina woman, and her American husband was the vice president of legal affairs of Sony Pictures in Los Angeles. Before we went inside, she asked for my passport. She said she was going to extend my visa and petition for my family to come to America to be with me. Again, my happiness overwhelmed me, and I believed her.

Within a week, I had a ‘daily work schedule,’ taped to the wall in the kitchen. It ran from 5 a.m. to 10:30 p.m., which was incorrect, since I also had to bring the dogs outside in the middle of the night. I had to take care of the dogs in addition to cooking, cleaning, washing, vacuuming, ironing, dusting, hemming clothes, and maintaining the plants. Every month, I cooked a large pot of a special Filipino dish of ground beef, rice, tomato, carrots, and broccoli for the dogs, but was fed leftover food that had been in the refrigerator for days. I had to brush the dogs’ teeth, clean their ears, and give them vitamins each day, but I had to sleep on a dog bed in the living room, even though the house was large, with a guest room and music room. I kept my belongings in the laundry room.

I felt that my boss disliked everything I did, no matter how hard I tried. She told me I was ignorant and brainless, and, as I later alleged in civil court, she hit me and pulled my hair, and left me with bruises and cuts.

I was scared of her, but also ashamed that this was happening to me, an elderly woman who deserved respect. I wanted to escape, but had no idea where to turn. And all kinds of fears kept me paralyzed. My visa expired, and after that, I was afraid of being arrested. My boss also told me I was responsible for paying back my airfare and that of her mother, since I couldn’t have come to America without her. She also deducted my everyday items from my salary, like shampoo and lotion. As I claimed in my lawsuit, I was paid a total of about $300 for my entire time with the family. Even if I made it back to the Philippines, I didn’t know how I could pay back my loans there.

I tried to tell people about my situation. I wrote notes to my boss’s husband. He seemed concerned about the physical abuse. But when the wife found out we were speaking about it, things only seemed to get worse. When the boss’s mother and brother came to visit, I told them too, but they gave me a prayer book and told me to pray. I think they were afraid of her too. I called a friend in Chicago, but she herself was undocumented and afraid to get involved.

In the end, the neighbors were the ones to help. From when I took the dogs out, I made friends with the 13-year-old girl next door. I couldn’t keep from crying when we were together, and eventually told her what was wrong. She told her mother. Plus, her parents sometimes sat at the swimming pool close to our condo  and heard the yelling and hitting through the walls. Her mother asked my boss if I could come help when their cleaning person didn’t show up, and my boss, trying to be a respectable neighbor, let me go. We were able to talk, and the mother encouraged me to escape. But I wasn’t ready. I was still too scared.

This went on for a year. I rarely spoke with my family on the phone, and I didn’t tell them how bad it was, because it felt useless. What could they do from so far away, given all of the debts we had? Because I didn’t have an outlet for expression, I would write things down on paper. At the end of each day, I would write the exact date and list the things my boss said and did to me. I also kept good track of the deductions made from my paycheck. This meticulous recordkeeping was a way to relieve my emotions for the day. But it was also the thing that built my case against the family.

Finally one day, we got a knock on the door. It was the police. One of the neighbors had called and said I was being hit. He asked if I wanted to talk with him alone outside, but I was silent and only looked at my boss. Even though my boss treated me cruelly, she was still my boss, and because of my culture, I felt I should obey her. Also, I had no papers, and didn’t want to be put in immigrant detention. Finally I said, 'Sir, maybe some other time. Please give me your business card.' I slept at the neighbors’ house that night. The whole experience was a blur.

The next day, the FBI and the Immigration and Naturalization Service, which now falls under the Department of Homeland Security, showed up. My boss had called immigration enforcement, trying to get me deported before I revealed the truth. They took me to a government building for several hours. I waited and waited, as exhaustion swept over me. Finally, a woman from SIPA, Search to Involve Pilipino Americans, took me to the Pilipino Workers Center (PWC), a local Filipino organizing group. My life then changed.