At the age of sixteen, Rayanne was groomed into forced prostitution in Vancouver. She tells fo how she came to terms with what had happened to her. 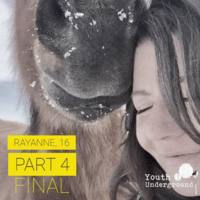 At 34 years of age, I like to believe that I am in possession of a respectable vocabulary. If that fails me, well then, I usually have on hand my trusty smart phone that keeps me connected to the web; ever expanding my knowledge with just the click of a button. However, four years ago, when presented with the word ‘Groomed,’ my thoughts authoritatively ﬂowed towards my career as a Performance Horse Trainer, invalidating all other deﬁnitions. Yet, the word reiterated throughout my waking and sleeping hours, tickling the sleepiest corners of my mind.

Then, like a shot, my brain awoke. A damn bursting with years of accumulated knowledge on horse breeding, horse training, methods, theory and application, before ultimately blind siding me. Grooming = Human Trafﬁcking = The Sex Slave Trade.

My reality had become a mineﬁeld of calculated perceptions geared towards self-preservation. Hundreds of miles away from my past, I made a shocking and somewhat distressing discovery. At the capricious age of sixteen, I myself had been thoroughly ‘groomed’ by a street gang, into a prostitute. Amazingly that wasn’t even the bad part about my revelation! The sickening part, for myself, was that I had spent ﬁfteen years believing my sexual servitude had been because, as society had told me, I was a damaged nasty woman…

I remember looking in the mirror, days after the first time that my boyfriend not only raped me, but then drugged me and shared me with his friends; my war wounds, the bruises around my neck across my back and rib cage, the handprints on my body, all began to fade, and as they receded, it became easier and easier to convince myself it had been my fault. I was being overly dramatic, and virginity wasn't a big deal... That moment in the mirror became the tip of an iceberg.

I grew up on a farm not far from a city where gangs ran rampant and the streets were bloody from drug wars, in the fall of 1998. Slut shamed for what had been done to my body, I stayed away from Langley and began to hang out around the city. My friends, my family—nobody looked more than skin deep at me—except one girl.

At the age of 16, instead of revelling in my youth, I had been so expertly groomed by another young female, that I didn’t even know I was stepping into a life where I was going to end up dead like all the others nobody knew or cared were going missing. This was the era of Robert Pickton (whom I would later be lucky enough to escape). A bunch of street tough kids were the original gang that had been smart enough, cunning enough to know how to befriend me when I was lost and needing a home. They were the only ones who were savvy enough to capitalize off of the violence that had shaped my childhood and sexuality—by offering me something for which I had a defence system in place: love.

Further investigation lead to hidden attitudes I had been harbouring with the ﬁerceness of a mother bear. Remnants of love for a gang long disbanded echoing along the chambers of my memories, romanticized the co-dependency that had once fed my enchantment for their tribal ways. A feeling that did not extend to the other pimps that I had learned to fear, and ﬂee.

But was love alone really enough to overcome the excruciating fear of sex, intimacy, and men that had branded my skin at sixteen? Was it possible that I had traded my Cowboy Boots and the back of a horse, for Stilettos and the infamous Downtown Eastside on Hastings Street in Vancouver, B.C.? Like the cocktease I was accused of being before I was raped, the moment where I seemingly make a conscious decision to sell my body, for the 15-year-old female whom had recruited me, taunted my insatiable curiosity; until I plundered the internet looking for the relief of knowledge.

Armed with hyper rationality and the ability to compartmentalize, night after night I faced off with the internet. Before long, bullet-form statistics blurred into one long list of ingredients like a, ‘How to’ on training your own prostitute. Impersonal words meant to describe my intimate accounts, read off like a grocery shopping list.

Empathy took a back seat as maddened laughter coursed down my cheeks. None of those words explained how or why a child (myself) was able to go against all their ingrained lessons and instincts to ‘seemingly’, willingly mistake prostitution as a viable life choice.

PROSTITUTE. The pimps hadn’t called us that by chance. It was a widely acknowledged truth that the streets were lined with girls, not women.

As the statistics and my experience began to mingle, I became a girl on ﬁre. How was it that all across the WORLD, no matter religion, socio-economic status or early behaviour patterning, girls are falling prey to the same particular method of recruitment that I had? And why the fuck was there no real information except for the common words like ‘Lured’, ‘Tricked’, ‘Manipulated’, etc.? There was a connection.

On more than one level—I just couldn’t see the whole picture yet. Discouraged but not defeated, I sidestepped what was already known, and turned to the universe. ‘Help me to understand my choices please?’ And boy did it deliver!

A book fell (literally) at my feet in a store, entitled, The Female Brain, by Louann Brizendine M.D. I ate it up in one sitting. I found myself oddly satisﬁed to learn that psychology alone was not the agent provocateur sent to disrupt and divide my childhood. Rather, psychology ran with a ‘word-disassociation’ posse made up of genetics, chemicals, hormones, and structural as well as functional brain differences (which vary in each individual, and even more drastically between boys and girls).

The entire book by Louann Brizendine M.D. uncovered more for me than I can possibly share with you in one article.

Epigenetics, childhood patterns passed down through family, abandonment, rape, gang rape, social conditioning—there was no one ingredient that went into creating within myself the perfect symbiont for becoming trafficked as a child hooker. So many more things would come my way in the future.

To be honest I feel like having been trafficked is really the LEAST interesting part about me! The real struggles and accomplishments came in my life came after I escaped the pimps—the adventures I've been on, the jams I've squeaked through, the people I've met, and the places I've travelled. None of that would have happened if it weren't for my time on the streets.

My compassion has grown. I now willingly choose to feel the love I felt in my heart for the gang and have even extended that love to the other pimps and hookers I once knew. Some will think me naive, referring to my choice as somatic memory, or might even try and label it as Stockholm Syndrome. Nonetheless I choose to embrace love as my inner compass to self-value and peace. The perspectives of my experiences are no less real or invalid because I am able to add hindsight and science to the mix. Another person’s actions or hidden agendas have no reﬂection in my reality because I make my own choices and stand steadfast with accountability. I would encourage any other who has walked in my stilettos, to embrace this truth wholeheartedly with me.

All I ever wanted as a child was to get lost in the meadows and ride the wings of fairytales. But life had other plans for me. The evil in others has stolen more than its fair share of my innocence and in the bowls of their hell, a fighter was forged. Blood Lust rolled me in its embrace, and in self-defense, I learned how to take a pound of flesh from the Devil himself, smiling wildly with blooded teeth.

But there are times in between the darkest of nights when I can allow myself rest, to tread deep inside the forest of my heart where she remains hidden forever—the little girl, my other self. I feel her soul is soft as velvet, her hope and grace shimmering like a flower petal. She holds my broken pieces together and they slowly mend with her encouragement. She reminds me of all the beautiful and wondrous things in this world for which I am fighting. She loves me for every shape I have taken in her defense, every fault that has cracked but never shattered.