Chris Bates was trafficked for sex at 16 years old in the United States. He created a social media account after feeling isolated at school which drew attention from older men who offered to pay him for images of himself. After running away from home, Chris need money for rent and placed an advert with an escort agency which led to him being trafficked for commercial sexual exploitation. He was able to escape his exploitation and begin the process of healing after meeting his boyfriend. Chris tells of the struggles being a male survivor of sex trafficking and the role religion played in his trafficking story. Chris as set up a grassroots organization, Overcome Exploitation, to help male, trans, and non-binary people who have experienced any kind of exploitation. 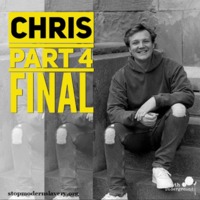 My name is Chris, and I am a male survivor of sex trafficking and exploitation.

I grew up in a dysfunctional family like many young adults, wrapped up in red tape, meeting barriers to acceptance everywhere I went. Being gay didn’t help, as it further isolated me in high school. Desperate for attention, I created a social media account and caught the attention of many older men who offered me to pay me for pictures. I dropped out of high school and ran away from home, getting my own place, but still needing to pay rent with no job skills.

A peer suggested I place an escort ad, which eventually led to my being exploited by a third-party trafficker who benefited by charging to drive me to hotels to meet with men. I ended up losing all sense of self-worth and felt completely lost, until I met my current boyfriend of over 4 years. He accepted me as I was, someone “exiting that life,” without judgment. He is someone my own age, supportive and understanding, and because of him I realized that I had something and someone else to live for.

Now the big job of healing and repairing the damage done to family and friends began. I became active in the community, using my lived experience as a platform to relate to other survivors and help them exit that same miserable existence. Over time, I discovered that there’s a lot of support for cisgender females that have been trafficked, but a big gap for male survivors, transgender, and non-binary survivors of exploitation and trafficking. As a peer outreach specialist, commissioner for the Massachusetts Commission on Unaccompanied Homeless Youth, and co-chair of Worcester county youth action board, I took up the torch and worked to shed light on these inconsistencies.

Last year, I founded a grassroots effort by starting Overcome Exploitation, a survivor-led fellowship, that raises awareness of and educates communities about the trafficking of male, trans, and non-binary survivors. In January, I collaborated with Pathways for Change, and was able to light the Shrewsbury Bridge blue for Human Trafficking Awareness Month. Overcome Exploitation recently had its first and successful fundraiser, and as founder and visionary, I look forward to the growth and inclusion of more male survivors to be a part of this worthy cause.⁣

Exiting the life and realizing that sharing my story could resonate with other young adults and empower them to overcome and exit prostitution. From my experience, there are no young adult male survivors of exploitation who have been willing and are able to safely to step forward and share their stories and I want to change that. ⁣

[...] being a gay man from a rural community made me more vulnerable to exploitation. I was raised in the Catholic faith, before gay marriage and gay society became open in our culture. Being a youth also made conversations around my sexuality difficult to navigate. I internalized many feelings and that is what contributed to me running away. Seeking something that I didn’t have at home, older men gave me the attention that I wasn’t given at home. Their expensive gifts and money temporarily helped me fill a void.

My relationship with my family was difficult. I grew up in a dysfunctional home with a single mom, who suffered from mental challenges, and my dad was absent in my life. I remember when I was around 16, I would often lie to my mom and tell her that I was going to hang out with a high school peer, but I was really going on dates with mostly older men over 30 for money

A good indicator of me being trafficked was when I was 16 and I had a Blackberry which at the time was a pretty high-end cellphone and my mom couldn’t even afford a simple cellphone. Other signs included:

-Dropping out of school

-Being well dressed but ignoring the demographics of my home life

-Having many older men on social media

-Sleeping too much during the day

My traffickers offered friendship, transportation, and a sense of security. I felt that they were my friends at the time.

Exiting is a process, it’s not like I woke up one day and thought to myself I’m not going to be a prostitute anymore, it happens over time. Also, what helped is I had a boyfriend that was my own age that supported and inspired me to move forward in my journey.

Healing. I have created healthy boundaries with my family. I have accepted to meet my parents where they are at. I listened to my dad and gave him a chance to be a dad. I speak to my mom daily and take day trips with her sometimes on the weekends. I speak to my dad daily and often grab a bite to eat with him.

There are definitely some closed doors but more open doors, which can be tough. As part of my exiting journey, I got connected to local nonprofits that help the homeless and I wanted to volunteer. After being isolated “in the life,” I didn’t have much experience building organic connections. Without realizing it, when I was helping my community, I was also building a good support network. When I was “in the life,” I doubted that I would have any meaningful connections in this world. Today, I have more empowering people in my life than I had ever imagined

Overcome Exploitation is a grassroots effort to create a survivor-led fellowship centered on the experiences of male, trans, and non-binary survivors of any form of exploitation. Additionally, Overcome Exploitation educates communities to better understand the realities of prostitution and to create exit ramps for the exploited.

[an issue that is considered to only affect women and girls is] Sexism. We live in a culture where men are seen as perpetrators and women are victims, and there are no gray areas. Men are not often seen as victims.

I didn’t realize how harmful exploitation was while I was involved in it. Trauma physically changes the way your neurotransmitters fire in your brain. I have been in trauma therapy for 3 years and things still impact me. For example, at times, when I get intimate with a person, sometimes I disassociate and feel as if that person is a sex buyer. During #COVID19, my state had a stay-at-home order and I felt trapped in my place like it was a hotel room. I have had to create boundaries with people that are still in the life or those who encourage me to return to the life. Overall, the recovery process was not easy, but it has been worth it. I am amazed with all the skills that I have to offer the world rather than my body being sold as a product.

[I am looking forward to] Purpose, peace, and enjoyment. I look forward to having a family, traveling, and creating a fellowship of male survivors of sexual exploitation.

The original narrative can be found here: